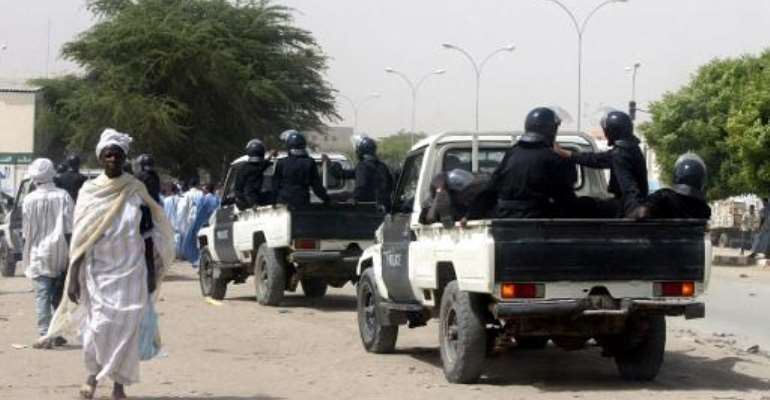 An AFP reporter saw police beat the activists and spray them with tear gas as they waved placards and chanted slogans outside the offices of the election commission in the capital Nouakchott, calling for a boycott of Saturday's parliamentary and local elections.

"The police violently attacked the demonstrators despite the peaceful nature of their movement, using tear gas and batons," said Idoumou Ould Mohamed Lemine, spokesman for the Coordination of Democratic Opposition (COD) that organised the protest.

"Many people, mostly women, were wounded and transported to hospitals in Nouakchott," he added, condemning "these acts of violence which are contrary to democracy and the free expression that the government prides itself on".

The injuries appeared to be minor, according to the AFP journalist at the scene.

Mauritania, a mainly Muslim republic and a former French colony, is seen by Western leaders as strategically important in the fight against Al-Qaeda-linked groups within its own borders, in neighbouring Mali and across Africa's Sahel region.

Around a third of its 3.4 million people are eligible to vote in the first parliamentary and local polls since 2006, two years before a coup mounted by junta chief Mohamed Ould Abdel Aziz.

The strongman was elected president in widely contested polls in 2009.

Around 1,500 candidates have been on the campaign trail since November 7, vying for the leadership of 218 local councils and 147 seats in parliament.

But 10 parties in the 11-member COD are boycotting what they call an "electoral masquerade" after talks on how the vote should be run broke down in October.

Thousands of the coalition's activists marched through Nouakchott earlier this month to protest against the staging of the polls but the campaign has been conducted without major incident.