Wikileaks and Guerilla Politics in Ghana 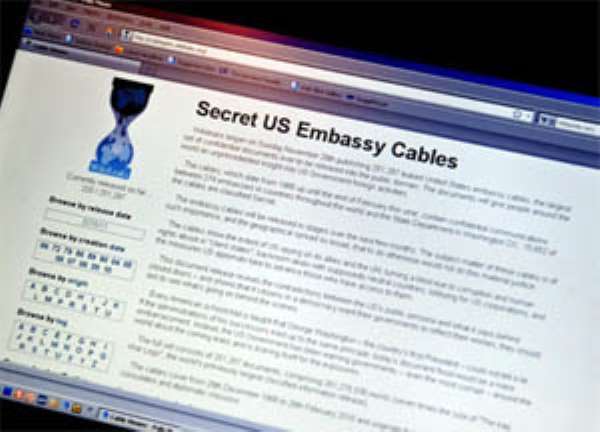 For some time now, I have resisted the urged to write about the Wikileaks revelations that have hit Ghana these last several weeks. This is because the more I think about the WikiLeaks episode; the less I know what to say about it. Unfortunately, too much commentary, right and left, has tried to inject certitude where ambivalence should be. My father used to tell me that if I do not know enough about any issue, the best course of action to take is to shut up. So instead of commenting on individual leaks, I just want to draw attention of Ghanaians to the challenge of guerilla politicians in our mix.

Guerrilla politics is my term for a form of dissent usually carried out by insiders who are dissatisfied with the actions of political parties, public organizations, politicians, or people but who typically, for strategic reasons, choose not to go public with their concerns. A few guerrillas end up outing themselves as whistle-blowers, but most do not. In local parlance in Ghana, they are called Osesegbe. They work in the dark. In addition to leaking information to the media, guerrillas might obey their superiors in public, but disobey them in private; ghostwrite letters, testimony and studies; neglect policies and directives they disagree with; fail to implement orders they think unfair; hold clandestine meetings to plot a unified staff strategy; and fail to correct superiors' mistakes.

The Wikileaks have outed people who are disgusted by the dirty politics that have overtaken the country and wanting people to see the truth about individual politicians or government actions that are “awful” and “horrifying”. But these guerrillas run the spectrum from constructive contributors to deviant destroyers. The obvious point is that, those receiving the leaked information like the US diplomats, might get more—and more sensitive—information when their contacts believe that what they say will remain secret. But common sense also tells us that people are more likely to lie, exaggerate and distort when they know they would not be held accountable for what they said, and that people like to say what their interlocutors want to hear.

There are several conditions that tend to encourage the festering of guerrilla political activities. The most prevalent is when those in charge arrogantly do not listen. Guerrilla activity also can be fueled by foolish moves by zealous political appointees who think they have a mandate based on rhetorics uttered on the campaign trail.

In Ghana, the WikiLeaks materials have been very useful in revealing impropriety involving government personnel and political figures in the country and the result has been a more aroused public and hopefully a greater accountability. The net effect of the publication of this material has been to let the public in on information it has every right to know in the first place. "Secrecy" is continually being used to cover up criminality, incompetence and corruption - that's the overwhelming and overriding message from the Wikileaks disclosures - and that's why these disclosures are so critically important.

It is obvious that certain individuals are been ridiculed and ostracized because politicians don't like to be shown to be so deeply in the wrong and that they will be held accountable even for their private behaviors. Surely the most salient point about WikiLeaks's "revelations" is precisely how little truly shocking material they contain. But the very word 'secrecy' is repugnant in a free and open society, the type we want to build in Ghana. Secrecy which is the first refuge of incompetents must be at a bare minimum in a democratic society. Those who want to be elected or appointed to positions of executive authority must recognize that government, in a democracy, cannot be wiser than the people. As a society that is aspiring to champion free speech, the country should defend the rights of leakers and media organizations to disclose secrets that advance a public interest without fear of retribution.

All politicians lie, but with Wikileaks, disaster lies in wait for those who smoke the same hashish they give out. The only effective antiseptic for official mendacity is exposure. To suppress the truth in the name of political expediency is the surest way to undermine what we claim to be preserving. There is a Latin legal maxim—justitia fiat, ruat coelum: Let justice be done though the heavens fall. When paraphrased it says: Let the truth be told as we see it though politicians claim the disclosure would cause the heavens to collapse upon them.

The moment Kwesi Pratt, a close friend of Nana Akuffo Addo, refused to deny or confirm his “allegation” and asked Nana to defend himself, I knew that was the final confirmation that he said what was published and geared me toward the belief of the use of drugs by Nana Addo. Because the normal behavior of somebody who is wrongly accused is to vehemently deny it no matter whether the public has made up its mind or not and no matter if he will be believed or not. You see the pain in their faces and in their demeanor. They shout on top of their voices to redeem their honor and put on record their denial. Unfortunately, that is not the case with Kwesi and Nana.

What's really is at stake here is not individual privacy, it is the dirty linen that is hiding in the closet and which the country had dealt with in the past or has to deal with in future. I am surprised that politicians in Ghana do not know the time tested saying that if you cannot keep your secret, don't expect others to keep it for you. The threat of massive leaks will persist so long as there are massive secrets. Secrets are only as secure as the least trusted person who knows them. The more people who know a secret, the more likely it is to be made public.

At least for me one of few genuine revelations of the leaks is the intelligence and professionalism of the career foreign service officers who wrote the leaked documents. The men and women who are supposed to be America's eyes and ears around the world seem commendably wide awake. Now can the rest of us be, too? For those of you who don't know, American cannot keep secrets. I don't know about other parts of the world but those of us who have had the chance to live amongst Americans know that the surest way to get your secret out to the public is to tell an American.

In the modern networked age, when the watched can also be the watchers, nothing less than the credibility of authority itself is at stake. Democratic governments presumably rest on the consent of the governed, but only if the governed trust the word of those who would govern them. In this changed environment, the people formerly known as the authorities can re-earn that trust only by being more transparent, and by eliminating the contradictions between what they say and what they do. “Where you're open, things will not be WikiLeaked,” says Christopher Graham, Britain's information minister. He adds, “The best form of defense is transparency”. In fact, when people think what they're doing is subject to public view, their behavior generally changes for the better.

Thus the leaks which exposed many politicians and public figures to a new level of public scrutiny, and warning them that more such scrutiny is always a possibility in the future—should, on balance, lead to better behavior. Why? Because the cost of maintaining the contradictions between what you say in public and what you do really has just gone up another notch.

From now on, it will be ever more difficult for politicians and governments to claim one thing and do another. For in making such claims, they are making themselves vulnerable to WikiLeaks of their own. If all it takes is one person with a tape or the “least trusted person” whose conscience may be pricked by a contradiction in his or her friend's or government's behavior, that information can move into public view more easily than ever before. That is the reality of the twenty-first century. It would be far better for all of us if our leaders, governments and other powerful institutions got with the business of accepting that transparency will be a new fact of life, and take steps to align their words with their deeds.

Many people in Ghana, including Alhaji Kwaku Baako has sort to downgrade the information in the leaks as mere gossips or were not properly obtained from the “right source” as if that meant the information in those documents was somehow unfit for public consumption or discussion simply because they weren't leaked in the proper way. For someone who has tried to pride himself as an investigative journalist, Kwaku Alhaji's position is a singularly ostrich-like move. And unfortunately for him and all the other political pundits, burying your head in the sand doesn't make bottom-up transparency disappear.

Of course, we can't take for granted that the powers that be will let this happen without a fight. In that respect, the battle over WikiLeaks has had another salutary effect: it has delivered a wake-up call to everyone who thought the free and open press was a settled fact. Freedom of the press is no longer the exclusive province of those who own one. It's good to have the darker side of politics and government exposed. Too often the media in Ghana is biased and controlled.

But how all the leaks and other issues are viewed by the public hinges significantly, however, on the perceived value of the leaked cables. But for now, all I can say is for politicians and people in authority to create a positive organization culture within the parties that accepts, welcomes, and encourages candid dialogue and debate. Create a questioning attitude by encouraging members to challenge the assumptions and actions of the party and party leaders, even if it demands boom speeches.

Leadership should really listen to their followers as they may be the singing birds telling you that something is wrong and leadership should create multiple channels for discussion, dissent, and input from inside and outside the party hierarchy concerning possible constructive changes.

Guerrilla politics is alive and well in Ghana and Wikileaks is sure to happen again, with a different face, at another time. Mark my words.