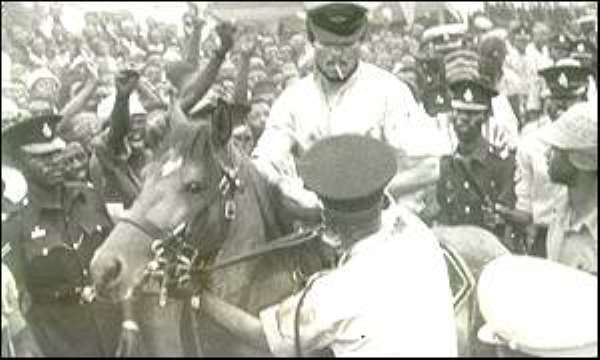 .........Office of Rawlings has dismissed allegations A commission investigating human rights abuses in Ghana said Friday it will give ex-President Jerry Rawlings a week to respond to allegations that he ordered the murder of four people, including three judges. The allegations were made at a hearing of the national reconciliation commission Thursday by ex-Corporal Matthew Adabuga, who said he once plotted a coup with Rawlings. Adabuga, now working with the Red Cross in Russia, said Rawlings ordered the murders of three high court judges and a retired military officer in 1982 and said he was with Rawlings when the former president was told "the assignment" on the judges was finished. "Rawlings did not utter a word, and went to the refrigerator and opened champagne to drink," Adabuga said. Ghana's former president ruled for 19 years until 2001, winning foreign applause for economic reform and for giving a lesson in democracy to fellow African leaders by stepping down following the two elected terms he was allowed. The commission was set up to probe abuses in the former British colony by five military administrations from 1966, including those of Rawlings, who led coups in 1979 and 1981 and had three former heads of state shot on a beach for corruption. "We'll send him a transcript of Adabuga's testimony, and then we'll give him a week to respond to the charge," the commission's executive secretary Ken Attafuah told Reuters. If Rawlings does not respond, Attafuah said he could be subpoenaed by the nine-member body. Adabuga said those convicted of the crimes told him that Rawlings had asked them to carry out the murders. Four people, including close Rawlings associates, were convicted of the killings. Three were executed and one escaped. Neither Rawlings, a former air force officer, nor his spokesman were immediately available to comment.

The 1982 murders shocked Ghana. Four charred bodies were discovered at a shooting range three days after the victims were reported missing. They included a woman, Koranteng Addow, whose breast had been cut off.