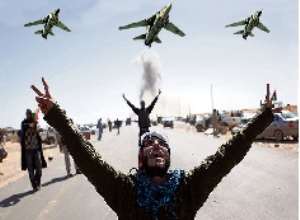 A spokesman for Libya's NTC called Algeria's refusal to recognize the NTC and their acceptance of Gaddafi's close relatives "acts of aggression against the Libyan people".

Another sign of the nature of the Libyan rebel NTC is their unfounded arrogance against Algeria. After alleged atrocities against African citizens and their failure to at least give assurances of their safety and fair treatment they think they can intimidate Algeria.

The position of Algeria which has very long border with Libya is very significant and crucial. Actually all southern Libya and almost all central and western Libya are still in the hands of Gaddafi loyalists.

The split of the World over the support and recognition of the Libyan rebels NTC is very clear in the following map:

Map Key: (notice the bright blue color gives more weight for those who recognized NTC despite being a minority)

Those who do not recognize Libya rebels and its TNC are:

Those who recognized Libya rebels and its TNC include:

Those who do not recognize Libya rebels and its TNC include: