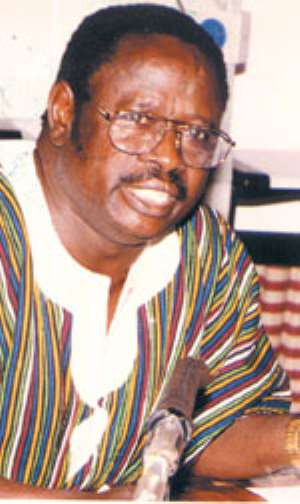 After days of back and forth arguments over the US$3 billion Chinese credit facility to finance infrastructure projects under the Ghana Shared Growth Development Agenda (GSGDA), the deal has finally been sealed, with Parliament approving the controversial Master Facility Agreement (MFA).

Despite declaring their support for the intent of the projects contained in the MFA, the Minority Members of Parliament (MPs) abstained from the voice voting, giving the Majority members of the House a field day to approve the loan deal by popular acclamation.

A thunderous 'aye' from the Majority side of the House sealed the deal when the First Deputy Speaker, Edward Doe Adjaho, who presided over the sitting, put the question 'as many as are in favour of the motion for the adoption of the resolution say 'aye'; to which Majority members of the House responded 'aye,' and the Speaker continued, 'those against say 'naye'; at this juncture, there was no response from the Minority side. Mr. Adjaho went ahead to declare the winner of the voice vote, saying, 'The 'ayes' have it, the resolution is accordingly adopted.'

The approval of the two-tranche loan facility, each US$1.5 billion, but with different terms, enters the history books as the biggest-ever credit facility sourced outside the shores of the country to undertake various infrastructural projects. The Majority members referred to the loan agreement as 'STX PART II'.

The first tranche has a five year grace period, 15 years re-payment period, a commitment fee of one per cent flat, an interest rate of 2.95 per cent, six months LIBOR (London Inter-Bank Offer Rate), and an upfront fee of 0.25 per cent flat.

The second tranche of $1.5 billion has a grace period of five years, ten years tenure interest rate of 2.285 per cent, six months LIBOR, 0.25 per cent upfront fees per annum, and a commitment fee of one percent per annum.

The debate of the motion for the approvable of the MFA loan of US$3 billion was postponed on Thursday, August 25, 2011, when the Chairman of the Joint Committee on Finance and Poverty Reduction Strategy, James Klutse Avedzi, withdrew the committee's earlier report, following concerns raised by the Minority members.

The goal of the credit facility, according to movers of the motion, is to enhance the efficiency and effectiveness of the oil and gas sector operations, as well as industrial minerals processing and agro industrial ventures.

The MFA, the report noted, would be disbursed under individual subsidiary project agreements (Subsidiary Agreement) to be signed between implementing agencies, and the contractors, for the construction and establishment of projects to be financed from the facility.

Actual disbursement of the funds would be for projects, for which the Subsidiary Agreement had been approved by the Government of Ghana, through Parliament, and the China Development Bank (CDB).

Projects under Tranche A1 of the loan agreement include the Western Corridor Renewal Project with railway components, Western Corridor Infrastructure Renewal Project, Takoradi Port Phase 1 Retrofit Rehabilitation, and the Sekondi Free Zone Project, which include the development of onsite infrastructure and utility services for the proposed industrial minerals processing estate and alumina refinery.

Benefits to be derived from the projects, according to the Joint Committee on Finance and Poverty Reduction Strategy, include added value within a relatively short time to the nation's gas resources, by developing it to its fullest, to the benefit of the country.

Repayment of the loan facility, according to the report, would be effected from petroleum revenue and other government owned resources. Due to the aforementioned terms of repayment, the reported stated that a commercial contract for the off-take of oil would be entered into by the Ghana Petroleum Corporation and the Chinese authorities.

According to the report, the government would reduce the impact of commercial projects on the public debt, through an on-lending and escrow arrangement for most of the projects under the facility.

Fifteen percent (15%) of the Government of Ghana's (GoG) counterpart funding would be paid from the 'Owner Contribution Account,' to be established as a sub-account under a main 'Collection Account' to be established at the Bank of Ghana, into which the GoG would deposit funds towards the repayment of the loan facility.

The committee's report further stated that the government intended to repay the loan facility through the Annual Budget Funding Amount (ABFA) with the Petroleum Revenue Managing Act, 2011.

Under clause three of the Master Facility Agreement, a minimum of 60 per cent of each tranche was required to be paid to the People's Republic of China (PRC) contractors, a clause which allows about 40 percent of the facility to be applied towards local content sourcing, or sources other than the PRC.

Prior to the approval of the loan facility, the Minority had argued that though the intent of the facility was good, inconsistencies, coupled with contradictions in the whole agreement, ought to be corrected before going ahead to source the US$3 billion Chinese loan.