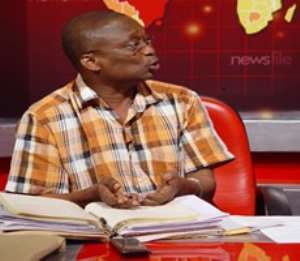 Abdul Malik Kweku Baako, Editor-in-Chief of the New Crusading Guide newspaper, says he is embarrassed that the STX housing project has not seen the light of day and is urging the government to repackage the deal for reconsideration by Parliament.

Malik Baako was one of the few opposition figures who backed the government deal to build 33,000 affordable houses for the security agencies to reduce the nation's housing deficit.

This was at a time when the minority in Parliament had vehemently opposed the deal on the basis of political risks, among others.

A year after sealing the deal, no work has started as the partner firms heckle each other in an ongoing wrangling with threats of ending the partnership.

However the feuding partners on Tuesday agreed to return to the roadmap for the construction of the affordable houses.

During a discussion on Peace FM's morning show, Kokrokoo Wednesday, Mr Baako stressed the need for repackaging the deal, saying: “we don't have to throw the baby away with the bathwater”.

He said this was a critical moment for the government to ensure accurate information flow on the project to end the speculations by the public.

He maintained that it will not be in the interest of government to keep the deal outside the framework of Parliamentary after the facilitators have agreed to work together.

“I backed it, in principle I still back it but I have to be honest I'm embarrassed,” he observed.

Commenting on the $3 billion Chinese loan which has also generated controversy, Mr Baako advised government to exercise patience and listen to those who are raising caution with the scenario of the STX deal in mind.