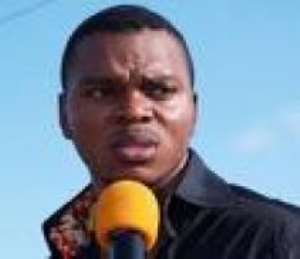 A Tema-Based herbalist and spiritualist, Togbui Amuzu, yesterday set the stage to cause a stir in Christian circles when he declared his capacity to reverse the curse invoked by the embattled , the self-acclaimed man of God, on his former girlfriend’s child.

After dazzling a group of journalists in Accra with his spiritual prowess, Togbui Amusu, who styles himself as a professor of the spiritual realm, also announced his readiness to heal the three-year-old child, who had become physically challenged as a result of alleged machinations of Bishop Obinim.

According to Togbui Amuzu, he was directed by the “Holy Spirit” to come to the aid of the innocent child who was unnecessaril embroiled in a conflict he had no power to disentangle himself from.

Bishop Obinim, the Head Pastor of the International God’s Way Ministry, was said to have conceded on an Accra-based radio station that he cursed and crippled the three-year-old child of Gifty Fobih, the wife of Pastor Williams Fobih, an assistant pastor of Bishop Obinim and leading Bible reader of the church.

The child in contention has, since his childhood, been unable to walk or function as a normal person, a situation Bisop Obinim claimed responsibility for.

According to the Bishop, he rubbed his hand on the head and legs of the innocent child to render him mentally incapacitated and physically paralysed.

Bishop Obinim explained that he took that action because the mother of the child had deliberately embarked on a mission to malign him with the intent to collapse his church and his marriage to Mrs. Florence Obinim.

However, the physical challenge of the boy does not appear to be a problem for Togbui Amuzu, who claimed to have cured difficult ailments of people from different parts of the world.

“I am committed to save the child who has a bright future,” he declared.

And to make real his assertion, Togbui Amuzu held a group of journalists spell-bound with his spiritual exploits by pouring water into a newspaper fold without the paper getting wet and later commanded the water to pour from the newspaper into a red glass.

Whether Togbui can live up to his promises remains to be seen.

But Togbui Amuzu, who is known for using his services to promote the interest of businessmen and politicians, said, “Bishop Obinim used spirit to cripple the innocent child. I will also use spirit to reverse that spell.”

Togbui Amuzu said since the pastors were finding it difficult to heal the innocent boy, he would perform that task to give glory to the Almighty God.

Asked whether he derived his powers from, he said, “We all worship the same God. The Almighty God gave us strength and wisdom and directed us to use herbs to cure, but not to destroy with those gifts.”

Togbui Amuzu, who owns the Great International Temple at Michel Camp in Tema, said he had used herbs to cure similar ailments afflicting the innocent child and gave an assurance that “God’s name will be praised”.

Covid-19: 5G Network Is Not The Cause – NCA To Ghanaians
54 minutes ago