Should Africa be scared of the Chinese exploration? 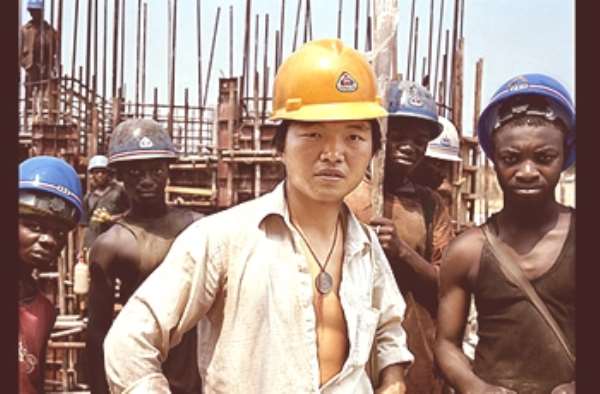 Ade Sawyerr, one of Britain's foremost African thinkers gives an insight to an emerging relationship between African countries and the Chinese Republic.. Should Africa now look East and abandon the long standing albeit rocky relationship with the West. Ade informs.

David Cameron's speech in Nigeria included a warning for Africa to be cautious in their dealing with China and a suggestion that the authoritarian capitalism model adopted by the Chinese was not sustainable and will not help in the development of Africa.

But this warning needs to be examined against the backdrop why it has taken 50-60 years for the West to be rekindling their interest in Africa as the preferred trading partner as it was at the time of independence. We should ask whether this warning has anything to do with the fact that the Chinese are filling the space that the West abandoned because they were not interested in our holistic economic development but only in access to our goods.

Cameron's speech touched on three issues of importance to the West when Africa is mentioned: aid, trade, and democracy.

He promised more targeted aid to areas of conflict and improved mechanisms for delivering aid that would bypass corrupt governments. But he did also mention that Britain was yet to meet its target of spending 0.7% of Gross National Income on aid. In 2009 it spent 0.52% - £7,365 million - in total on aid; £1,559 million of this on the 800million people in Black Africa or sub-Saharan Africa, equivalent to £2.00 per capita. What he did not say is that roughly 40% of this is spent on the many consultants that work on these projects and the British goods and service that are purchased as a result of aid and that African governments would prefer to have greater control so that the aid is channelled to better support social development related services.

Cameron was robust on trade. He bemoaned the fact that Africa could do better than the 12% intra-African trade, that is way below the two-thirds that takes place amongst European Union member countries. He reiterated the commitment of Britain as a serious trading partner manifested by the many businessmen and women that had accompanied him on this trip. But he did not explain why 50-60 years after independence Britain had lost its position as Africa's preferred trading partner and was now rekindling their interest in the Continent again.

The third plank of his speech on democracy is to be welcomed. Multiparty democracy does indeed breed good governance; the view that some form of authoritarianism is necessary for accelerated development and growth, as manifested by countries such as Thailand, Malaysia and Singapore and latterly by China, should be rejected by all.

But the reality is that the pattern of trade favoured by Britain and the West did not assist in the development of Africa and may have been the cause of the stunted economic growth on the Continent.

Several examples abound. Nkrumah in Ghana built more schools in 10 years than the British did in 100 years of the Gold Coast. Our road and railway systems were all from the hinterland to the coast to carry our primary goods away. The communication system was such that a simple telephone call from Ghana to Togo had to be routed through England and France. There was deforestation at an alarming rate without any effort to replant those trees that were exported and sold, and of course destruction of the land in search of minerals. Whilst covertly supporting rogue regimes such as Ian Smith's Rhodesia and apartheid South Africa, Britain was busy subverting nations such as Ghana that sought to forge a Continental union that would provide, military, economic and political strength.

The West's insistence on democracy and spending money on the development of institutions has not paid off for Africa, it has not rid the Continent of corruption in government contracts, many more cases of corruption are now surfacing western companies desperate to do business in Africa that they promised bribes when none had been demanded. Indeed the West and international multilateral agencies have not asked Africa what it really wants for development but have experimented with orthodoxies based on the way that they developed some centuries ago. Western governments behave as if these development methodologies are fixed and sacrosanct and have general applicability regardless of local context and customs.

Africa needs massive development in infrastructure before it can deploy an accelerated rate of industrialisation to catch up with the rest of the world. Without that infrastructure base Africa will remain a supplier of primary products to both western and eastern countries. It is this, much needed, infrastructure base that, will engender the tooling capability, which the West had failed to provide, but that the Chinese are very much interested in delivering for Africa.

Infrastructure investment will create a virtuous environment that will help Africa transform its agricultural and extractive commodities from low to high value products and help Africa in its drive towards capital formation that will be more beneficial to the Continent than basic trading in low value goods and services.

Leapfrogging from low value agriculture to high value services is unlikely to happen without a strong manufacturing base; even in the mobile phone industry with exponential growth taking place in Africa we do not manufacture the technical equipment, do not own the networks, do not write the applications and even though we supply the critical raw materials we do not manufacture the phones.

Whether the Chinese exploration into Africa will turn into exploitation of the Continent depends on whether African leaders have learnt the lessons of past years and are able to negotiate terms of contracts that will benefit their countries.

Africa at this critical stage in its development, when it is still viewed as a frontier rather than an emerging market, needs more state involvement. Private companies will not build the schools, they will not build the hospitals, and they will not build the roads, the rail and the communications networks. Recent privatisation of utilities following World Bank orthodoxy has not delivered more potable water or more electricity for the people. Privatisation may work when the base infrastructure is in place, but it certainly is not working to help create the free and fair society to which most nations aspire.

The western governments have delivered little and are hung up on democracy and freedoms, and perhaps rightly so, because in their experience that was how they developed.

The Chinese come with an open book, turn a blind eye on issues of free press and human rights, but they leave tangible structures, houses for the poor, roads and railways. In return they are able to satisfy their need for energy as well as increase their markets in - what one would term - a mutually beneficial engagement.

The problem with David Cameron's warning is that whilst African government would want to listen, they also see the West being bankrolled by the Chinese, they see the factories that the Chinese are building in western countries, they observe that as recently as before Cameron's trip, the Chinese Premier had been to Britain where he signed contracts worth £2 billion and to Germany where he signed contracts worth £10 billion.

So African governments are bound to ask, if Britain is so intent on doing business with China and China holds so much American debt, why Africa should be wary of the Chinese.

Africa should recognise that its interests are paramount in any negotiations on trade or investment, but that it should chose its own way forward to development. It should eschew the doctrine of unbridled free markets much in the same way as it should steer clear of authoritarian capitalism.

Africa needs to accelerate its agenda for a Pan-Africanist union because that is the only way that it can prevent neo-colonialisation whether the threat is from the Chinese or from the West..

It is ironic that 50 years after Nkrumah was overthrown in Ghana because of his Pan Africanist agenda, this route may be the only effective model of stopping the Continent's exploitation, and indeed may be the only agenda that can help create our own model for accelerated development. This agenda incorporates self determination and less reliance on foreigners based on a principle of social justice for all the poor in Africa with a large dose of collaborative cooperation amongst all Black nations.

Ade Sawyerr
Ade Sawyerr is partner in the diversity and equality focused consultancy, Equinox Consulting. He can be contacted at www.equinoxconsulting.net. You may email him [email protected] or visit his blog at http://[email protected]

Komenda factory: "Mahama constructed the roof before buildin...
1 minute ago