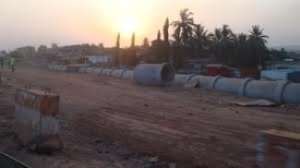 The activities of traders along the Tetteh Quarshie-Mallam road are impeding work on the reconstruction of the highway.

Work on the 14-kilometre highway began in 2009 under the Millennium Development Authority (MiDA).

The project is part of the transportation component of MiDA’s initiatives geared towards poverty alleviation. But MiDA is worried the problem may make it impossible for it to meet the January 31, 2012 deadline for the completion of the project.

Traders and hawkers have invaded the Lapaz portion of the road, thereby creating problems for engineers working on the project.

The problem came to light when officials of MiDA took people from the Millennium Challenge Corporation (MCC) on a tour to inspect progress of work on the $85-million project.

The problem persists, even though MiDA has paid compensation worth over GH¢20 million to those whose properties and businesses were affected by the construction of the road.

The authority has also given entrepreneurship training to 1,200 affected traders to make them self reliant — an initiative it describes as “unprecedented”.

Work on the project is progressing, even in the midst of these challenges. Engineers working on the project told the Daily Graphic that a big portion of the highway had been completed and they were optimistic that they would beat the January 2012 deadline.

Several activities of residents along the highway are also posing a threat to the early completion of the road. They dump refuse in the trenches dug by the contractors.

According to the contractors, those activities gave them more work and added to the project cost.

During the tour, hawkers were seen plying their trade along the road and even in the middle of the road, a development the

contractors described as dangerous.
Some of the traders who spoke with the Daily Graphic insisted that they had to get their daily bread from the business they conducted along the highway.

The Head of Resettlement at MiDA, Ophelia Ayeh, told the Daily Graphic that her office had done enough to move the hawkers, but with little success.

She said it had already identified some 5,000 people who were benefiting from the project’s resettlement programme and expressed the hope that MiDA would be able to complete the project before its five-year mandate expired.

“MiDA has a mandate to ensure that this 14-km stretch of road is completed and that is what we are committed to achieving. We have been able to do the bulk of it but we are also committed to beating the January deadline,” she said.

The delegation from the MCC was delighted at the progress of work so far and was full of commendation for MiDA for its work delivery in Ghana.

The Head of Publicity with the team, Mrs Valerie McFerrin, told the Daily Graphic that the American taxpayer whose money went into the Millennium Challenge Account (MCA) would be happy to read the report of the delegation.

“The MCA exists to confront development challenges and inspire economic growth and we think that is exactly what the programme has achieved here in Ghana and that is what we are reporting back to the American people,” she said.

The MiDA is in charge of managing the MCA on behalf of the Ghana government.

The account is given to beneficiary countries to invest in programmes that seek to fight poverty.

MiDA’s mandate expires in February 2012 when the Ghana government will apply again for renewal.

Lack of toilet facility in a school causes pregnancy of 15-y...
25 minutes ago