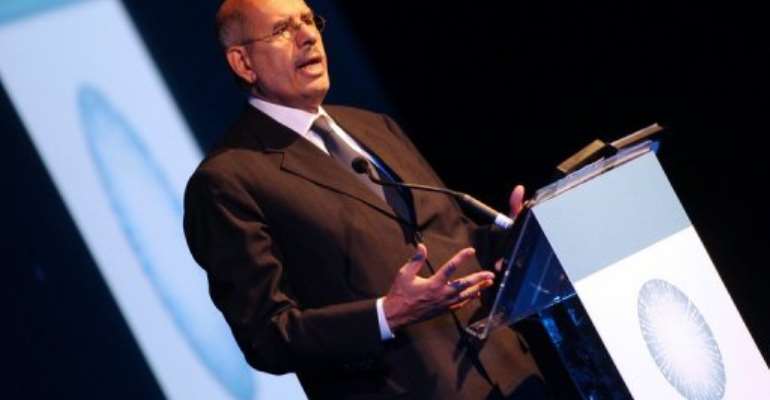 Mohamed ElBaradei won a quarter of the votes in an online poll for the next Egyptian president. By Karim Sahib (AFP/File)

CAIRO (AFP) - Former UN nuclear watchdog chief Mohamed ElBaradei is the most popular choice for next Egyptian president, according to an army survey conducted on Facebook, state media reported on Wednesday.

The survey, which was launched a month ago on Facebook, asked members to rate their favourite for the country's top job, in an exercise criticised as unrepresentative.

He was followed by Islamist thinker Mohamed Selim al-Awa with 17 percent, and Ayman Nur -- who heads the liberal al-Ghad opposition party-- with 13 percent.

The survey was conducted by the Supreme Council of the Armed Forces (SCAF) -- which took power when former president Hosni Mubarak was ousted by a popular uprising in February -- without explicitly stating its purpose.

The military council has yet to set the date for presidential elections, but said polls for the country's leader would be organised after legislative elections in autumn and the drafting of a new constitution.

Its online survey has been criticised for being limited to the Facebook community, which does not reflect dynamics on the ground.

Suleiman came fourth in the online survey, although he has no plans to run for president, according to recent statements he made to the media.

The month-long survey, which ended on Wednesday, comes at a time of political upheaval, culminating this week in a cabinet reshuffle aimed at placating protesters who are furious at the slow pace of reform.

Protesters who first took to the streets to demand Mubarak's resignation have increasingly directed their anger at the ruling military, accusing it of maintaining its absolute grip on power and using Mubarak-era tactics to stifle dissent.