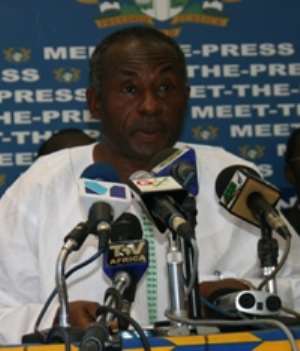 He said Government was banking its hopes on a Chinese loan facility to start the rehabilitation of the railway lines by the end of the year.

Alhaji Dauda made this known during workers' durbar at a popular site in Ketan in the Western Region, known as 'Bottom Tree', where pertinent issues affecting railway workers and the railway sector were discussed.

The Transport Minister noted that, the economic viability of the railway sector was paramount towards revamping the economy and assured the workers that, Government would not sit aloof for the Ghana Railway Company (GRC) to collapse.

He urged the workers to support every effort being put in place by the Government to revitalise the sector.

Alhaji Dauda observed that the work attitude of the workers would go a long way to determine the fate of the Company.

“There is a popular perception that, public institutions are not well administered because they don't belong to any individual. But if we change our attitude towards public work and work assiduously towards its sustainability, its positive rippling effects would be felt by all,” he stressed.

“The current spate of road crashes in the country could be attributed to the inefficiency of the railway sector because heavy duty trucks that ply our roads often cause the accidents.

“…If we rehabilitate the railway lines, people would prefer using trains to cart their goods instead of vehicles since they are affordable and reliable.”

The Minister said he had set up a three-member committee to review the law that established the Ghana Railway Development Authority (GRDA).

According to him, there was the need for the law to be reviewed to ensure effective and efficient management of GRC.

He said: “The promulgation of the law has limited the GRC because the GRDA is the regulator whilst the GRC is the operator thus making decision-taking towards the revitalisation of the sector difficult.”

Alhaji Dauda said as the law stood now, the GRDA had the authority to issue license to the GRC to operate.

He noted that, if the law was reviewed, it would help the restructuring process of the railway sector effectively and efficiently.

Alhaji Dauda charged the Management of the GRC to engage the workers regularly, at least once a month in order to know their problems and concerns.

He advocated the frequent flow of information from the Management to the workers front to ensure trust and transparency.

The Minister said communication was vital towards efficient management of any public or private institution.

He pledged his commitment towards the payment of the workers' salary arrears as well as promotion and collective bargaining agreement issues.

The Acting Managing Director of the GRC, Mr K. B. Amofa said freight traffic remained the mainstay of the company accounting for 90 per cent of the revenue it generated, covering a route length of 947 kilometres.

He said much of the freight traffic were primary commodities such as manganese, bauxite and cocoa meant for export through the Takoradi Port.

Mr Amofa said successive governments failed to use the revenue generated from export to maintain the infrastructure and assets, thus leading to the current deplorable state of the railway lines.

The Acting Managing Director called for major infusion of capital into the railway sector to ensure the realisation of its full potential.

“As at now, about 45 per cent of locomotives and wagons required to run and achieve set freight targets have broken down and are being repaired, but lack of spare parts has delayed their service since some of them are (more than) 50 years and needed to be replaced.

“There is difficulty running cocoa trains due to the poor track infrastructure from Dunkwa to Kumasi while cement and timber trains cannot go to and from Kumasi for the same reason,” he said.

Mr Amofa said the signal and telecommunication systems which were installed in 1984 had broken down thus hampering communication.

During the open forum, workers expressed their sentiments such as low remunerations, late payment of salaries, and lack of information flow from Management.

They called for capital injection to revitalise the operations of the sector.