Diplomats And The Truth 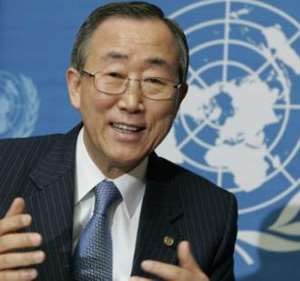 Two Saturdays ago, the UN Secretary General, Mr. Ban Ki-moon, stopped over in Accra on his way to the inauguration of President Allasane Ouattara of the Ivory Coast.

During his stop-over, the UN General Secretary made some remarks that should make every Ghanaian feel proud of President Mills or scratch our heads about diplomats and candour.

Amongst other things, the UN boss lauded the President for his role in the peace process in the Ivory Coast. Indulging in a little bit of hyperbole, according to the usually authoritative Daily Graphic, 'He said the exemplary leadership role of President Mills in crisis situations in Africa was unmatched', and described him as 'the best leader on the African continent.' Well, since we do not know of any other crisis that the President has played a central role in, we must presume that all the accolades were for his singular role in the Ivoirian crisis.

Admittedly, it is possible that Ban Ki-moon is privy to information that the rest of us ordinary mortals are not privy to. So it is conceivable that President Mills did more for peace in the Ivory Coast than Goodluck Jonathan, who led ECOWAS to evolve their 'no-nonsense' approach to Mr. Gbagbo's undemocratic antics or Kenyan Premier Raila Odinga, who had to travel all the way to Accra to straighten President Mills out.

While the UN chief's generous words are in the best traditions of diplomacy, they, respectfully, do not stand up to scrutiny.

Simply stated, the facts are at variance with the UN General Secretary's effusive praise of the President. Here are the immutable facts, as we know them;

First, there was an election that through a run-off produced a winner in the person of Allasane Ouattara, according to the Ivoirian Electoral Commission, the UN, ECOWAS and the Africa Union.

Second, Mr. Gbagbo's allies had the results in certain parts of the Ivory Coast annulled and declared him the winner.

Third, ECOWAS, backed by the AU and the international community, gave Mr. Gbagbo an ultimatum to hand over power or face military action.

Fourth, President Gbagbo chose to defy the will of the Ivoirian people and the international community.

Fifth, President Mills, after signing on to the ECOWAS ultimatum, condemned the military option and stated that Ghana would not participate in any such effort. He was praised effusively by President Gbagbo for his stance.

Sixth, Mr. Gbagbo was in fact, removed by force, culminating in his inglorious surrender in his singlet, with the French leading the forces that forced Gbagbo out.

Now, given these facts, all known to the public, it is difficult to justify the accolades being showered on the President.

Is this really damage-control on a scale that would have made Goebbels and or Squealer proud?

What secret role did the President play in the ouster of Gbagbo?

How did his public disagreement with ECOWAS help solve the Ivoirian problem?

Was the Ghanaian President, after all, for the military option that worked? If he was, what was the fuss all about?

While he was supporting this option, what was happening to the 'Dzi Wo Fie Asem' doctrine?

Today, right on cue, the normally authoritative and balanced Daily Graphic said 'Amen' to Mr. Moon's accolades. Now, the Daily Graphic , in keeping with the tenets of good journalism and its reputation, could have, to borrow a term from Abdul Malik Kweku Baako, 'interrogated' the issues surrounding the UN Chief's statement. Instead, it decided to swallow what Ban Ki-Moon said, hook, line and sinker. To be fair to the Graphic , they were not alone in perpetrating this unfortunate fraud on the public. Virtually all other newspapers reported the comments of Mr. Ban ki-Moon without any scrutiny.

Now, Ivory Coast and the International community need to move on. President Ouattara must heal his nation's wounds, reconcile factions, comfort those who lost loved ones and pursue justice on behalf of those who have been wronged. For this to happen, there must be reconciliation, within the Ivory Coast and between it and her neighbours, and the international community, led by the neighbours of the Ivory Coast, particularly, Ghana.

But, we cannot build the future based on lies and misinformation. We must accurately document what happened and name and shame those who deserve to be. That is why President Ouattara plans to put Mr. Gbagbo on trial.

It is inconsistent that while Mr. Gbagbo stands trial for his crimes against the Ivory Coast and humanity, the man he hailed as 'wise' for supporting him will be receiving accolades for his statesmanship.

As former US President Ronald Reagan used to say, 'We must trust but verify'. While the UN Chief and President Mills are entitled to a presumption of trust, we are also obligated, in the interest of truth and for the benefit of history, to verify their assertions. The UN Chief's praise of President Mills, who clearly appears to have undermined the international community, risks making more people believe the saying that 'Diplomats are honest people sent abroad by their country to lie' and more importantly setting a bad example for other leaders in the future. While the UN Chief may have had the best of motives in commending our President, he must remember that it is dangerous for good men, with the best of motives, to set bad examples for bad men in bad times. The UN Chief's unfortunate precedent, sooner or later, will be followed by others in more harmful circumstances. Indeed, it has been done before he came along. That is why Mobutu and Amin, to name only a few, had their praise-singers in the West.

To set the records straight for the benefit of history, I urge the Ministry of Foreign Affairs or the Presidency to release any additional information that may put the President's role in the proper context so that we can all, based on commonsense and our human experience, determine whether the President, indeed, while singing 'Hosanna' in public to Mr. Gbagbo, was also working to crucify him privately.

Furthermore, the UN, in order to maintain its own credibility, must explain how the man who condemned the policy that ended up removing Mr. Gbagbo, would end up being the person who 'was the best in solving this crisis'. It is these inconsistencies that have turned the UN, often and unfortunately into a toothless talking shop that is derided by serious powers and people. Indeed, even in this case, despite the enormous weight of diplomatic opinion on the side of Mr. Ouattara, it is probable that if the French had not decided to act, Mr. Gbagbo would still be sitting in Abidjan, thumbing his nose at the Ivoirian people, Africa and the rest of the World, with the firm support of President Mills.

Finally, the manner in which Mr. Ban ki-Moon's remarks were uncritically reported shows how far our media has to go in becoming the true guardians of our world. Hopefully, the leaders of our media can examine this incident and remedy this glaring omission. This will mean that in the next few days, credible journalists will begin the process of painstakingly taking the comments of the UN boss apart and trying to verify them, piece by piece. The UN boss would be taken completely apart if he had made such unsupportable statements in the West. Let us hold him to account.

Our media can do better than this. Let them stand up and make us proud. Let them help us determine, in fact if our President deserves these accolades so that we can all join in giving them to him.

Feature Article
Powered By Modern Ghana
How Civil Society Organisations Like STRANEK Can Help Unravel The Agyapaapabi-Assaaseyaa Jersey-SPAC-Heist
Let's Collaborate In Efforts To Curb The Carnage On Our Roads
Assange’s Fourteenth Day at the Old Bailey: Elections, Cracking Passwords and Failures of Proof
Dean Jones: Life of a Cricketing Entertainer
Not the Right Time to Tolerate any Independent Parliamentary Contestant in Kumawu Constituency
The Obvious Current Nature of the Ghana Justice System is the Number One Cause of the Underdevelopment of the Nation
Ivory Coast Increases Manufacturing Capacity to Advance Their Economy
Africa Threatened With Starvation: No Objective Reason
Grant Independence For Togoland
COVID-19 Updates Live Dashboard
TOP STORIES

Applaud EC For Compilation Of New Voters’ Register Within Sh...
51 minutes ago