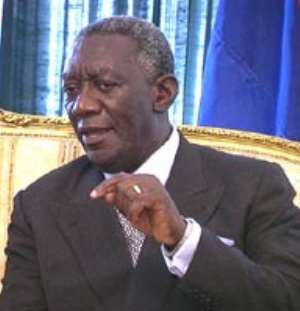 Two years into Kufuor's first term, I have tried and have employed mnemonic techniques yet I can't seem to remember such disrespect for State institutions and total disregard for the rule of law. Our judiciary continues to be harassed, threatened and disgraced; judges are blamed for government's inability to win cases. State security apparatus continues to be used to intimidate citizens.

Casting my mind back two years into Kufuor's government, I have tried and have even consulted “Mnemosyne”; the goddess of memory herself can't seem to remember the country contracting such nation wrecking debts. I can't seem to remember Kufuor borrowing more money in his first two years than the whole eight years of his predecessor. Instead Kufuor was busy trying to find a way to relief us of debt. Nor can I seem to remember cuts in education; freeze on single public sector hiring; monopoly in the Banking sector.

Casting my mind back, I've tried and have dug into databases and archives, yet nowhere is it written that two years into Kufuor's administration, his V.P intervened on behalf of a Cocoa smuggling company to get its license reinstated. I don't remember presidential aides handing out hampers; nowhere is it written that the NPP executives owned block factories; ministers owned mansions abroad.

Without any effort- this time-, I have cast my mind back two years into Kufuor's presidency and I can't seem to recollect Kufuor being challenged by not one but two people for the flag bearer ship of his party...why.... because none of the conditions described in this piece existed. The early signs during the first two years of the NPP's administration were encouraging. Certainly, Kufuor wouldn't have been given a second chance by Ghanaians if he had started the way Mills has.

As a result, the founder of Mills' own party wants him out. To the founder, Mills was a failure from the “first week”. And this charge of failure in the first week is no hyperbole, mind you. For, everything that has been laid down in this article started in the very first days of Mills' administration and has continued to this day.

Two years under Mills, leadership paralysis has been redefined as humility and God fearing; insults as wit; intimidation as national security issues; sod cutting as bona fide economic policies. There seems to be no hope on the horizon. But Ghanaians are lucky this time around. We have not only one but two chances to rid the country of such retrogressive, stagnant and unimaginative government. If, come July 8, his own people fail to make Mills a lame duck at their Congress, Ghanaians will get another chance on December 7, 2012, to save the country from lawlessness, institutional collapse, wanton corruption and economic stagnation.

Hopefully, it wouldn't be too late by then
Akwasi A. Afrifa Akoto