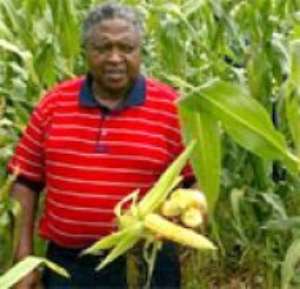 The Private Enterprises Foundation (PEF) has proposed the establishment of an agricultural commodity exchange to bring producers, buyers and consumers together to trade on a common platform.

The Director-General of PEF, Dr Osei Boeh-Ocansey, emphasised in an interview with GRAPHIC BUSINESS that his outfit had submitted proposals to the government’s economic team for consideration.

If the government buys into this plan, a networking system will be created to link all farmer groups in the country to business men and women and consumers who have use for their agricultural products to trade effectively.

“In bumper harvest, prices fall so low that farmers are not able to repay their loans, despite abundant production. Then, it follows that in the following year, not enough food is produced to feed the population. Why don’t people store grain from year to year. Why can’t the market deliver in bad times and save in good times. The PEF boss queried.

According to him, the inefficiency of intermediation had resulted in high post-harvest losses in the agricultural sector and the limited ability to attract investment into value-addition in the form of processing.

When adopted, Ghana would be the third country in Africa after Kenya and Ethiopia to embark on an aggressive overhaul of its agricultural sector.

Dr Boeh-Ocansey explained that since Ghana’s economy was basically agricultural, “it would make a lot of sense to see to the establishment of an effective commodity exchange that would not only eliminate the regular post-harvest losses through the buying of produce for storage, but also put money in the pockets of farmers in the short-term to facilitate their downstream operations”.

He singled out the agricultural sector as a major industry, which when helped within the scope of the Commodity Exchange, could raise the hopes of millions of farmers, especially large-scale farmers and make their lives more meaningful.

The PEF boss is of the view that the existence of a commodity exchange will boost the GDP growth rate and place farmers and a host of industry players in a position to increase revenue and revitalise the private sector.

Pursuing the right path which is the strategic approach to the development of commodities exchange in Ghana will involve the need to move locally produced commodities from the current non-industrial production storage centres into accredited warehouses and silos, in standardised lots, graded, shelf-life certificated and insured with no loss guarantees.

In addition to market information and linkage services as is the case in the operations of every commodity exchanges, the franchised market resource centres will develop a range of other services which may be lacking, but are beneficial to and in demand by poor smallholder farmers and their communities.

Examples are transport brokerage, which is considered to be a major constraint in matching offers and bids by the smallholder farmers.

Other linkages include warehousing and storage services often for short periods of time while the produce awaits sale at better prices the following market day and offering weighing services, which are virtually not available to smallholder farmers in the markets.

There are also the benefits of quality control services such as testing for grain moisture using moisture meters at the market resource centres and selling genuine farm inputs (fertilisers, seeds) at affordable prices.

The commodity exchange will also facilitate brokering financial services to farmers by banks and micro-finance institutions; and providing email service to smallholder farmers as well as their communities in the remote rural areas in which they are located.

The adoption of this as a policy in the budget formulation, Dr Boeh-Ocansey, believes would help to change the face of poverty in the rural farming areas.

At the moment, apart from cocoa that is traded on the international market, which serves as the benchmark for local pricing, purchasing and trading most of the commodities produced cannot be linked directly to global exchanges. There is therefore limited price discovery for them, which in turn, affects productivity in the sector.

The Securities and Exchange Commission is expected to come out with the needed regulatory framework to facilitate the Exchange and Clearing House once government accepts these recommendations from the private sector.

In setting up the Exchange, Dr Boeh-Ocansey called for infrastructure, legal framework, participation rules and dealing and settlement rules, as well as arbitration rules for the commodity sell-back trades and the financial derivatives.

PEF wants to quicken the pace of implementing a Ghanaian Commodity Exchange and Commodity Clearing House, which had had three failed attempts due to the unavailability of a regulatory framework.

Ethiopia, a country of chronic food shortages and malnutrition, has launched an agriculture commodity exchange in a daring experiment to raise food production by creating a safe and transparent agriculture market.

The idea to create a commodity exchange was hatched by a former senior economist at the World Bank, Eleni Gabre Madhin, who was born in Ethiopia and educated in the United States.