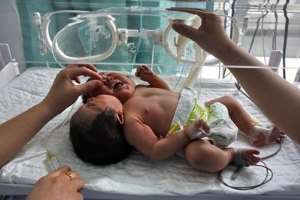 
A hospital in southwestern China says conjoined twin girls with a single body and two heads have been born at its facility.

Wang said Tuesday the parents, who are farmers, did not want to have the babies at first, fearing they could not afford to keep them alive. She said they transferred the twins to a hospital in the nearby metropolis of Chongqing to be examined by experts.

The local Huaxi Metropolis Daily reported the twins weighed 9 pounds (4 kilograms) and measured 20 inches (51 centimeters). They have two spines and two esophaguses and share other organs. Doctors were quoted as saying it would be nearly impossible to separate them.


Latest Photo Reports
Catch up with all the political quotes from our politicians.
Advertise here
More Health
ModernGhana Links
COVID-19: GHS advises against opening of land borders in 2022 1st quarter
Denmark supports Ghana with 2.1 million covid-19 vaccines
Ghana not recorded community transmission of Omicron variant yet – Dr. Kuma-Aboagye
Covid-19: Vaccines should work against Omicron variant — WHO
Dome Kwabenya Constituency gets NHIS Office
Everybody is vulnerable to HIV infection — HIV Ambassador warns
Chamber of Pharmacy rolls out 5 year strategic plan
COVID-19: Travelers who test positive will still go through isolation – Dr. Nsiah-Asare
Covid: It will be excellent to vaccinate 80% of the population before Christmas — GMA
TOP STORIES