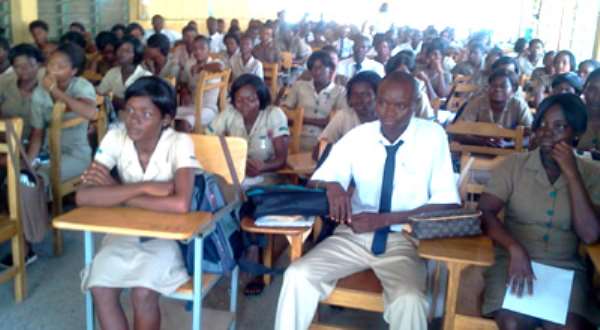 
The Wa Health Assistants Training School (HATS) is in dire need of help. The school currently operates from borrowed makeshift buildings because the school has no facility of its own since its establishment in 2006.

It was established with the aim of correcting the midwifery deficit that exists at the regional hospital after studies showed that most of the midwives were in the twilight of their profession.

Since then it has been operating on makeshift borrowed buildings where tutors and students have to shuffle between the ancient building of the GES and the regional hospital's canteen for academic work. It has a staff and students strength of 6 and 174 respectively.

The principal of the school, George Y. Seginitome expressed worry about the situation citing the case of their classrooms which is just by the hospital's kitchen. He said the situation doesn't encourage sound learning.

''The canteen is doubling up as a classroom and if you happen to be there, you will feel the way we feel. In fact, it's so disturbing, you cannot imagine how lectures will be going on whilst the kitchen is busy with all the aroma coming from the kitchen right pouring in to the classroom and you are teaching and then funny enough the student could be hungry. But that facility doesn't belong to them. This could be distracting.''

"We also have to grapple with space currently that should be big enough to accommodate the few books that we have for the library for the students to access", he added.

Mr. George appealed to the government to come to their aid by giving them premises of their own to solve the teething problems.

In a speech read on his behalf the upper west regional minister, Alhaj Issahaku Salia said the government is aware of the plight of the school.

He said the regional coordinating council was working round the clock to save the situation.