WE WILL FIGHT THE TRAITOR: JJ 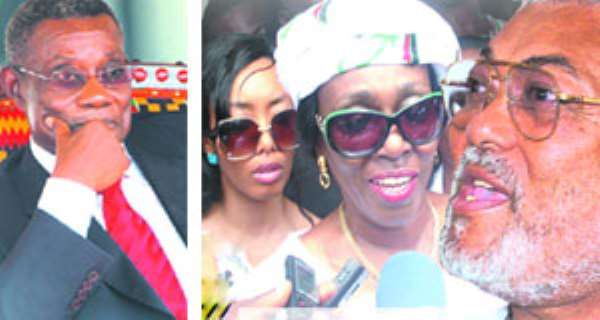 The Founder of the National Democratic Congress (NDC), Flt. Lt. Jerry John Rawlings, received the party presidential nomination form picked up by his wife, Nana Konadu Agyeman Rawlings, yesterday, and pledged to help in the fight against the opposition, the enemy within, and the traitor.

'The task ahead will not be an easy one. We will be fighting all kinds. If we are not fighting the opposition, you have the enemy also on one hand, and you have the traitor also on the other. So we have to remain vigilant.'

The former head of state did not elaborate, but close observers of the political scene have no doubt about the identity of the person he was referring to as the traitor.

The former air-force pilot has not minced words about the direction that the President and leader of the NDC is taking the party, and the country as a whole. He has had occasion to use all manner of words to describe President John Evans Atta Mills and his ministerial team.

He once described the President's team as 'greedy bastards' and 'who born dog' to challenge his authority.

He pledged to lend his full support to his wife on the campaign trail, in complete defiance of party directive that executive members of the NDC were barred from campaigning for a candidate in the presidential primary.

Earlier, Nana Konadu Agyemang Rawlings had picked her nomination forms in a blitz of showbitz, amidst tight security at the Kokomlemle office of the NDC.

The former first lady, in the company of her two daughters, waved the flag of the party and declared: 'The nomination forms mark the beginning of taking the country, Ghana, back to where it belongs.'

Her declaration drew cheers and thunderous applause from her teeming supporters who had swamped the party's headquarters to lend their support for her candidature.

Long before she arrived, young men on motorbikes displayed their agility wielding cudgels and other offensive weapons.

The arrival of the former First Lady and her entourage was heralded by drumming and dancing by her supporters wearing T-shirts with her effigy, with inscriptions such as 'Be Bold: Our Last Chance, The Great Hope: Spirit of The Nation.'

Leading the pack of Mrs. Rawlings team was Kofi Adams, spokesperson for the Rawlingses, who is also Deputy General Secretary of the NDC, together with the sitting Member of Parliament for Lower Manya in the Eastern Region, Mr. Michael Teye Nyaunu.

Security around the former First Lady was very tight, to the extent that media personnel gathered at the venue had to struggle before entering the premises of the NDC headquarters, situated on Adina Street in Kokomlemle. Friends of Nana Konadu Agyemang-Rawlings (FONKAR), as well as some sympathisers of the party, were conspicuous with their presence.

Mr. Herbert Mensah, who arrived earlier, was seen taking photographs of the scene, and refused to speak to The Chronicle on grounds that his views at the material moment did not matter.

A number of people, who thronged the NDC headquarters with the aim of catching a glimpse of Flt. Lt. Jerry John Rawlings, husband of Nana Konadu and Founder of the party, were disappointed.

The former President of the Republic of Ghana was missing in action. Pieces of information picked by The Chronicle indicated that he was engaged in a meeting, said to be equally important.

Amidst tight security, the former first lady had to struggle her way through the thick crowd to pick the nominations forms at the conference hall of the party's headquarters. She paid the filing fee of GH¢10,000.

The General Secretary of the party, Johnson Asiedu Nketia, sold the nomination forms to the former first lady on behalf of the party, after taking her through the requirements that come with the forms.

Nana Konadu has up to May 10, 2011 to file her nomination documents.

In a brief message to the media, after picking the nomination forms, Mrs. Rawlings said her picking up of the forms marked the beginning of her campaign, scheduled to be launched at the National Theatre at 9:30 a.m. today.

When contacted, Mr. Asiedu Nketia declined to comment on the significance of the picking of the forms by Nana Konadu, saying, 'It is no news to us.'