President Mills will lose elections if he becomes flagbearer – Rawlings 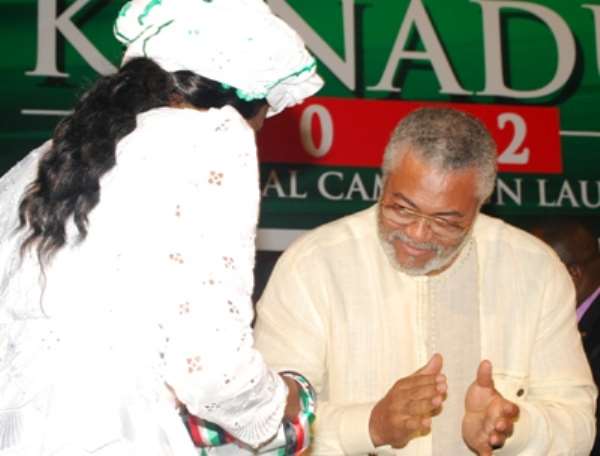 
Former President Jerry John Rawlings has said President John Evans Ata Mills would lose the 2012 elections even if he is elected NDC flag-bearer at the July National Delegates Congress.

He was speaking at the launch of the Nana Konadu Agyeman Rawlings' presidential campaign at the Accra International Conference Centre today.

“I have supported my friend (President Mills) when all the people he put around him deserted him – but I am saying they have done enough damage to the party just so they will stay in power – and I am saying now you will win but you will go and lose the national elections,” he said.

Former President Rawlings said the NDC started losing the 2012 elections right from the first week Professor Mills became president and the party finally lost it all eight months ago.

He said President Mills and his government were so intoxicated that they lost touch with the rank and file of the party and National Executive of the NDC had to deliberately postpone the National Delegates Congress two times because all their research showed that Nana Konadu was going to beat President Mills hands down if congress had been held earlier.

“Their first research showed that this lady (Nana Konadu) was going to win 82 per cent of votes at the delegates congress then they went ahead to bribe people some more and the rate reduced to about 76 per cent, which means some people yielded to the bribe,” he said.

The former president noted that the National Delegates Congress was originally scheduled for late last year but it was postponed to March this year, then to July all because the government and party leadership realized they had lost favour with the rank and file.

“July is their last option – they cannot postpone it anymore because if they did it will be an embarrassment for them and for us all,” he said at Nana Konadu's Presidential Campaign launch.

He said the government focused on giving contracts, board membership and board chairmanship positions to the elite in the party, forgetting that there were several thousands of party delegates down the line and they were now waking up to the reality but it is too late for them.

Former President Rawlings said he did not mean to disrespect “the Prof” (President Mills) but everything happening in the country right now shows that the time had come for change in order for the NDC to rescue the country.

He accused the Mills government of selfishness, saying that selfish tactics is breaking the unity of the party and it cannot no more be tolerated.

Former President Rawlings urged supporters of Nana Konadu to wake up to the reality of the NDC and ensure they do not repeat the mistake of putting the party in the hands of selfish people.

“This situation is only preparing the grounds for the enemies to come back again but that should not happen,” he vowed.

He congratulated his wife for taking the challenge to rescue the party and promised to say more on June 4, 2011.