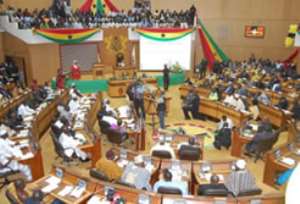 
Dr Kwaku Agyeman-Mensah, Ashanti Regional Minister has asked the Public Accounts Committee (PAC) of Parliament to be firm in its responsibility of guarding the public purse.


He said the time had come for decisive action to be taken against public officials who misconduct themselves in the management of public finances.


Dr Agyeman-Mensah made the call at the opening of the PAC's public sitting to consider the Auditor-General's Report on the public accounts of pre-university educational institutions in Kumasi, on Tuesday.


Forty nine (49) pre-university institutions in the Ashanti Region and 12 from the Brong Ahafo Region, which had received various queries from the Auditor-General concerning their accounts for 2005, 2006 and 2007, would be made to respond to the queries during the five-day sitting.


Dr Agyemang-Mensah said the public hearing was a demonstration of the commitment of the nation to ensure transparency, probity and accountability in the management of financial resources.


It was also a means of informing the people on how public funds were used in the development process.


Dr Agyeman-Mensah appealed to the heads of the affected institutions to cooperate with the Committee.


Mr Albert Kan-Dapaah, Chairman of PAC, said the committee was collaborating with the relevant government agencies, to ensure that people who misapplied public money were not only prosecuted but also made to pay back.


"A time has come to sanction people who abuse accounting rules and procedures in public institutions to serve as a deterrent to others", he said.


Mr Kan-Dapaah said the Committee was concerned about the level of financial misappropriation and irregularities in pre-university educational institutions, especially students' indebtedness.


He advised heads of schools to be conversant with the financial and procurement laws and run their institutions professionally.


Alhaji Amadu Seidu, the Ranking Member of the Committee, asked the heads not to see the exercise as a witch-hunt but an exercise to examine whether the institutions were adhering to proper financial management administration.