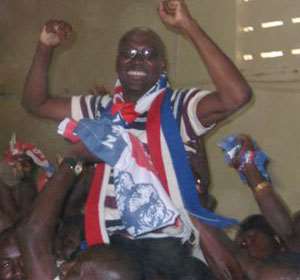 Some New Patriotic Party (NPP) gurus in the Central Region had the shock of their lives when they lost the parliamentary primaries conducted over the weekend in all constituencies.

Four leading members of the party out of 52 aspirants lost to new entrants.

DAILY GUIDE observed that the disappointed party gurus called their drivers to pick them up immediately the ballot papers were counted while others were nowhere to be found after the counting.

In Cape Coast, Madam Churcher was spotted in white attire awaiting the results but unfortunately she got up from the dais where all the five aspirants were seated and left the place.

She however congratulated the winner, Alfred Thompson and the other aspirants before leaving.

DAILY GUIDE observed that although Churcher's T-shirt was all over the place she lost by 50 votes.

In Abura-Asebu-Kwamankese Costituency, the former District Chief Executive (DCE) of the area, Job Acquah-Markin won the primaries due to his close interaction with the people at the grassroots.

Some of the delegates told DAILY GUIDE that Mr. Markin will make the 2012 campaign easy for them since he is loved by the people in the community due to his dedication to work when he was DCE.

In the Twifo-Hemang Lower Denkyira Constituency, Rev. Benjamin Donkor was accused of relating poorly with his people.

They claimed that he will not help the NPP to win the 2012 elections if they re-elect him.

This, according to the delegates, influenced them to vote against him since they want to re-capture the seats.

In all, five out of the 52 aspirants were elected by popular acclamation.

Below is the breakdown of the results of the Central Regional NPP primaries.

Residents of Settlement unhappy over destruction of road in ...
57 minutes ago