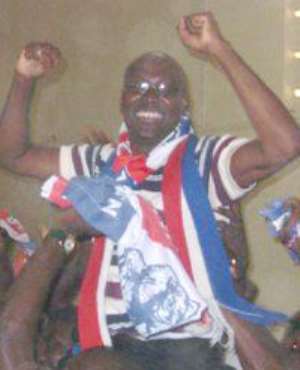 It was a surprise win for Thompson, who was not given a dog's chance by some NPP supporters in the former colonial capital. Anybody who heard the outcome of the primary marveled because they tipped either Dr. Abane or Arthur-Dadzie to emerge victorious.

When the results were announced, Thompson, 42, a General Manager of INJA Farms in Accra, polled 198 votes to beat Dr. Abane, Churcher, Arthur-Dadzie and Sagoe, who secured 163, 148, 92 and 26 respectively.  There was a spontaneous jubilation among the NPP youth when the EC officer mentioned the name of Thompson as the winner, because it was the youth who engineered his victory over the heavyweights.

However, Ms Churcher, who political pundits in Cape Coast said did well in securing 148 votes, judging from the kind of opposition she encountered on her return, with some party folks nearly writing her off in the initial stages. The former MP left the scene as soon as the result was declared.

By his victory, Thompson is set to face National Democratic Congress MP, Lawyer Ebo Barton Odro, who is expected to go unopposed, as party members and residents alike have commended him for his impressive performance.

Thompson in his short remarks told the press that he would work with the other contestants to regain the seat in 2012.

In another development, Dr. Kobina Arthur Kennedy failed in his bid to become MP for Abura Asebu Kwamankese (AAK), as Job Acquah Markins, a former District Chief Executive of the area, thrashed him with 299 votes against 159 votes.

At Twifu-Hemang, the sitting MP, Rev. Ben Donkor was kicked out by Lawrence Agyensiem who bagged in 169, while Donkor secured only 60 votes. Bright Wereko Brobbey another contender clinched 73 ballots.

Mr. Stephen Asamoah Boateng, a former Information Minister and MP for Mfantsiman West won on wide margin as he secured 643 votes to beat his two contenders, while Samuel Obodai received another endorsement when he polled 199 votes. Other contenders, namely Dr. Selby, Cynthia Morrison, Adan and Thomas Asante polled 193, 96, 57 and 26 respectively.

In Asikuma-Odoben-Brakwa Constituency, Emmanuel Adjei-Domson, former DCE for the area, was beaten by Anthony Effah Bako, a banker with Fidelity Bank. Domson polled 178 votes while Effah had 224 votes, with Mr. Godwill Ansah, another contender had 96 votes.

In his attempt to re-launch his political come-back for Gomoa East MP, Richmond Sam-Quarm, was thrashed by Dr. Cudjoe with a wide margin, polling 192 as against 105 by Quarm.

The only female parliamentary aspirant who was elected at Awutu Senya in the Central Region is Mrs. Mavis Hawa Koomson. She polled 307 votes to beat the former MP of the area, Oppey Abbey, who had 158 votes.

Gomoa West primary saw former presiding Member of the area, Oscar Abban, tasting his worst defeat after being prevented to contest in 2008 primary that resulted in some sort of controversy. He polled 34 votes while the winner, Abakah Williams, secured 333 votes.