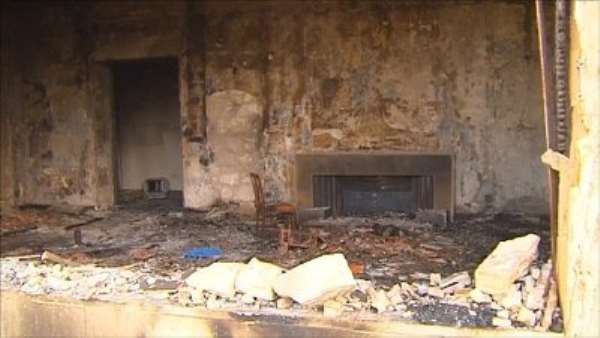 
The UN is withdrawing all its international staff from the Libyan capital Tripoli following a mob attack on its offices.

UN buildings and some foreign missions were targeted by angry crowds following a Nato air strike that reportedly killed a son of Col Gaddafi.

A UN official told the BBC its staff would withdraw from Libya and the decision would be reviewed next week.

After its Tripoli embassy was sacked, the UK expelled the Libyan ambassador.

A BBC team in Tripoli said the British embassy was completely burnt out with fires still smouldering and paperwork and other debris scattered outside.

In other developments, witnesses reported heavy shelling by pro-Gaddafi forces on the port of Misrata on Sunday. The city has been besieged for two months.

Libyan state TV said the port was shelled to stop Nato delivering weapons to insurgents but rebels said an aid ship had been trying to unload.

By not protecting diplomatic missions, the Gaddafi regime had "once again breached its international responsibilities and obligations", said Mr Hague.

He added: "The attacks against diplomatic missions will not weaken our resolve to protect the civilian population in Libya."

The Italian foreign ministry condemned the "acts of vandalism" on its embassy, describing them as "grave and vile". Italy - which closed its embassy in March and is represented by Turkey - recently joined the Nato mission in Libya.

There were also protests outside the US mission in Tripoli.

A UN official said the Libyan government had apologised for the attack on its offices, blaming an angry mob for the damage.

Most Western governments evacuated staff from Tripoli when an international coalition began air strikes on Libya several weeks ago.

Late on Saturday, the Libyan government said Saif al-Arab Gaddafi and three of Col Gaddafi's grandchildren had died in a Nato attack on a villa in Tripoli.

Nato has insisted its raid targeted a "command-and-control" building, and that all Nato targets were "military in nature".

Libyan government spokesman Moussa Ibrahim said Col Gaddafi and his wife had been in the building at the time of the attack but they were both unharmed.

He said the air strike was against international law and "a direct operation to assassinate the leader of this country".

Nato is operating in Libya under a strict UN mandate to protect civilians.

Later on Sunday, Libyan state TV said funerals for Saif al-Arab Gaddafi and the other victims would be held on Monday after noon prayers.

The BBC's Christian Fraser witnessed the damage and said that if Col Gaddafi had been there, it is hard to imagine he could have walked away unscathed.

Russia expressed "serious doubts" that the West was not targeting Col Gaddafi and his family.

"The claims of the coalition members that strikes over Libya do not have the physical destruction of Muammar Gaddafi and members of his family as their goal cause serious doubts," a statement from the foreign ministry said.

In the eastern rebel stronghold of Benghazi, shots were fired in celebration following reports that Saif al-Arab Gaddafi had been killed.

However, the claims were also treated with scepticism.

Mahmoud Shammam, spokesman for the anti-Gaddafi Transitional National Council (TNC) based in Benghazi, told al-Jazeera he believed it was "a ploy to fish for people's sympathy".

Khaled al-Urfi, a resident of the rebel-held western city of Misrata, told AP news agency: "We don't know if it is true or not because Gaddafi is a liar. I will only believe it if you put the body in front of me."

On Saturday, Nato officials said the alliance would not consider talks until government forces stopped attacks on civilians.

The vice-chairman of the rebel Transitional National Council also rejected the offer of negotiations.