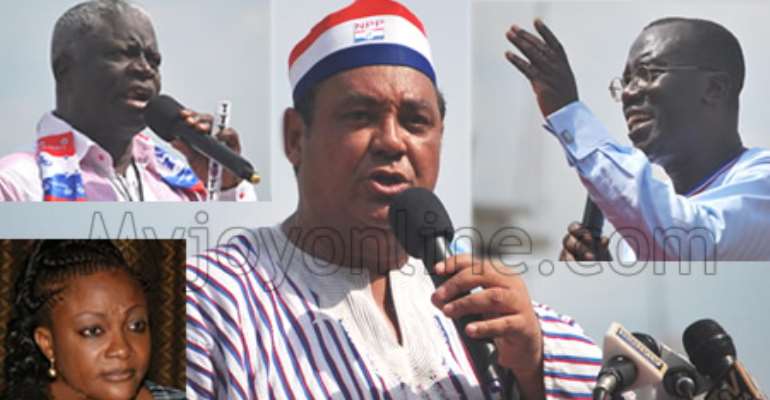 
The fate of 516 parliamentary aspirants of the New Patriotic Party (NPP) will be known by the close of Saturday when the party goes to the polls to elect its parliamentary candidates for the 2012 general election.

With the expanded delegates list, an average of 500 delegates per constituency will elect a parliamentary candidate, unlike in previous elections when some few delegates, numbering less than 100, voted.

Adrenaline is beginning to pump fast for the parliamentary aspirants as 122,414 delegates prepare to take part in the primaries which have 64 women and 452 men contesting for various parliamentary slots in the country.

Even in the 75 constituencies where aspirants will be running unopposed, the delegates must still confirm the aspirants through popular acclamation.

Elections in 10 other constituencies; Zebila, Talensi, Abuakwa North, Sissala East, Sissala West, Sege, Nkawkaw, Bosome Freho, Obom-Domeabra and Bekwai, have been postponed according to party officials, explaining that the decision to delay the primaries there was strategic and in the best interest of the party.

The NPP's annual delegates' conference scheduled to precede the voting has been cancelled. However, voting will go on as planned, starting at 9:00 a.m. and closing at 2 p.m., with the counting of ballots following immediately.

The party has handed over the entire administration of its national election, which is constituency based to the Electoral Commission (EC) and the commission is almost through with the printing of ballot papers for all the 147 constituencies which will participate in the elections.

The Ghana Police Service has also been asked to ensure security and orderliness throughout the exercise.

According to a Deputy Communications Director of the NPP; Mr. Perry Okudzeto, the leadership of the party has tried hard to stay away from the elections to ensure free and fair polls.

The 2012 flag bearer of the party, Nana Addo Dankwa Akufo-Addo, has also dispelled speculations that he has preferences in the constituencies, saying, it will be erroneous for him to support any candidate, given the fact that it is the constituency executives and membership who know the best candidates in their areas.

Apart from a few isolated cases, there appears to be relative peace and calm within the NPP fraternity.

The Ashanti Region in particular; the region described as the epicentre of NPP politics, is expected to be the most hectic battleground in the primaries on Saturday.

The build-up to the D-Day has witnessed accusations and counter accusations from some aspirants and their followers in the party's stronghold.

A contestant in Kwadaso, Ms Josephine Hilda Addo, has threatened to go to court to challenge the election in the constituency, alleging that the ballot papers have been doctored to favour her opponent; an allegation the party leadership has dismissed.

The NPP General Secretary, Kwadwo Owusu-Afriyie, aka Sir John, explained that the ballot papers were printed by the EC and wondered how an allegation of that nature could hold.

Another constituency where there is fierce competition is Nhyiaeso, where the incumbent MP, Dr Richard Anane, is seeking re-election as parliamentary candidate.

Another big question is whether Kwabena Amofa Sarpong can beat Dr Matthew Opoku Prempeh, aka Napo, to the contest in Manhyia.

With some 20 months to go for the next general election, the NPP already has its flag bearer and if it goes through its parliamentary primaries successfully without any difficulties, the party will be left with the selection of a running mate to make its campaign machinery ready for Election 2012.