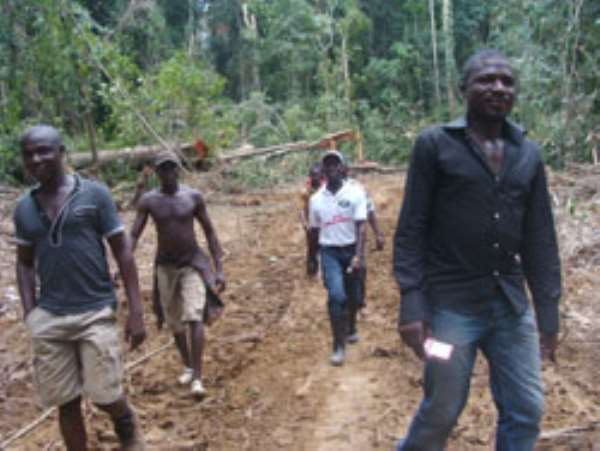 Officials of the Ellembelle District Coordinating and Planning Unit (DPCU) last week toured parts of the districts to inspect on-going developmental projects embarked upon by the Assembly.

The team visited Atababo-Santaso-Kwasikrom in the Aiyinase North of the District, where work on a 23-kilometre road linking the northern part of the District to the southern part was ongoing.

The visit, which is a routine exercise, sought to inspect the extent of progress of work on contracts awarded by the Assembly to individual and corporate organisations, and as well ensure the timely execution of the projects.

The Project Manager of Zaffas Construction Limited, Mr. Patrick Arizie, who took the team round the site, which took about three hours walk, indicated that the company had covered 15 out of the 23-kilometre stretch of road.

He was optimistic that his company would be able to hand over the project to the Assembly on the scheduled completion date, but pointed out the difficulty in carrying logistics to the project site since the area was un-motorable.

Mr. Arizie mentioned the recent increment in the price of fuel as a major factor which had affected the project financially. This is because the project was approved and awarded before the recent fuel increment. Nonetheless, the company would complete the project as scheduled.

The District Feeder Roads Engineer, Mr. Bio Meikano, said the project was funded under the District Development Fund (DDF), and hinted that he was content with the progress of work.

He, however, indicated that he would frequently visit the site to ensure that the right thing was being done.

The District Chief Executive (DCE), Mr. Daniel K. Eshun, thanked the contractor for work done so far, and asked him to exhibit quality in his work, and ensure that he completes the project on schedule.

Meanwhile, a total of sixty communities are to benefit from the Off Grid Solar electrification project. Mr. Wisdom Ahiataku-Togobo, Director of Renewable Energy at the Ministry of Energy, made this known at the installation of an Off Grid Solar panel at Ayawora, a community in the Ellembelle District.

Mr. Ahiataku-Togobo said the idea of the project was to improve health delivery service and encourage qualified medical staff to accept postings to off-grid rural communities on islands and lakesides.

It would also enable school pupils and teachers on islands and lakeside communities have access to basic electricity for lighting and education audio-visual TV/video programmes, as well as ICT education, and also enhance the operations of security outposts such as the police, immigration and Customs Excise and Preventive Service (CEPS) in off-grid remote rural areas.

Mr. Ahiataku-Togobo indicated that the project would also improve the standard of living of the beneficiary rural communities, through the provision of solar streetlights and mobile phone/lantern electric charging facility.

He, however, hinted that the engineers working on the projects would train indigenes of the communities benefitting from the project, and therefore, prevailed upon them to maintain the facility to attract other development projects to their area.

Most Rev. Atuahene Advocates For Peace Ahead Of Voting Day
57 minutes ago