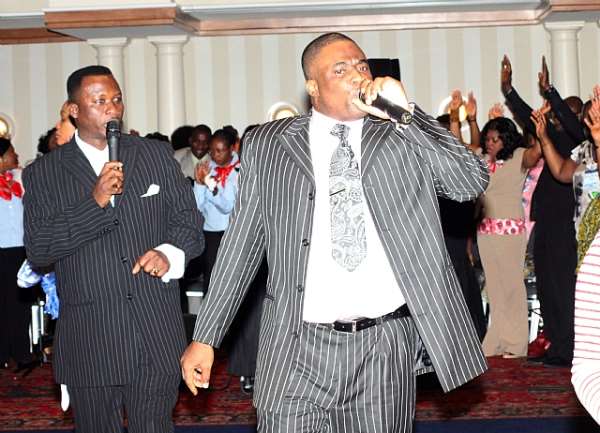 The city of Arlington, Virginia witnessed the biggest gathering of Ghanaians as Prophet Kofi Adonteng Boateng stormed the city on Good Friday to begin a mammoth easter convention.

The Sheraton and Crown Plaza Hotels in the city were over booked by thursday preceeding Good Friday. By midday on April 22, the Arlington Police had a hard time controlling traffic with the number of buses and cars surging towards the hotels .

By 7pm on Friday, the big auditorium of the Sheraton Hotel was almost packed to capacity. Crowd pulling praise and worship leader Collins Omane lighted the place up with mighty praise and worship that gingered the gathering in full anticipation of greater tidings at easter.

When Prophet Kofi Adonteng Boateng mounted the platform from back stage unannounced , people out of excitement were rolling and jumping as if they were litterally going to scoop their annointing out of him.

The excitement reached its peak when the Prophet grabbed the microphone , and led the gathering into singing “Yei Yei yei my Lord is good ooo” Everyone was responding with the chorus “double, double oooo!!!!!!. The service ran deep into Saturday morning and closed at 2 am.

On Friday night he spoke about how God uses the challenges that comes in ones life as a vehicle of elevation and unsurmountable blessings . He encouraged the gathering not to give up in the midst of challenges .

Services were held on saturday morning and evening . On sunday morning the entire gathering as if arranged were all dressed in white attire to signify the victory of the rising of Jesus Christ .

Miracles were unleashed, bondages were broken, the sick were healed and the man of God continuesly prophesied to the admiration of the crowd who were chanting “wo ye oddiii, wo ye Odifuo!!!!”meaning “You are a Prophet” !!!

Prophet Kofi Adonteng Boateng announced that the ministry has planted a new Church in Virginia.

Christians believe, according to Scripture, that Jesus came back to life, or was raised from the dead, three days after his death on the cross. As part of the Easter season, the death of Jesus Christ by crucifixion is commemorated on Good Friday, always the Friday just before Easter. Through his death, burial, and resurrection, Jesus paid the penalty for sin, thus purchasing for all who believe in him, eternal life in Christ Jesus.

Ghanaians in Virginia had an extraordinary Easter season, as the word is all over Virginia that this Divine Prayer Ministry convention under Prophet Kofi Adonteng Boateng surpasses all previous conventions .