Libya: Will the West listen to the Pope? 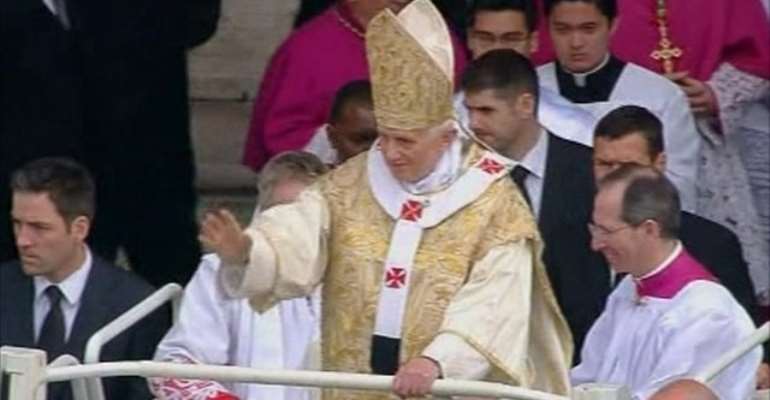 April 24, 2011
At long last, a powerful voice of reason has emerged to prove to the partners in the International Coalition that political problems must be solved through political and diplomatic means, not the flexing of military muscles. That powerful voice has confirmed arguments that humanitarian problems cannot be solved through the creation of more humanitarian problems.

The head of the Roman Catholic Church, Pope Benedict XVI, has urged diplomacy and dialogue to end the conflict in Libya. In his blessing at Easter Sunday Mass in St Peter's Square at the Vatican today, he also called for relief to be delivered to all those in need as a result of the conflict.

This is the message that some of us have all along been expecting from powerful figures like this Pope. It is a message that instills hope that it is not all powerful people (political or religious) in the world who see the use of military superiority (or might) as the one and only means to resolve conflicts between people.

I am gratified at the Pope's message even though I wonder why it took him so long to deliver it, more so when much devastation has already been done to Libya by the International Coalition. Furthermore, the timing of the Pope's message makes it lose some weight, coming at the routine, predictable ceremony on the annual Christian calendar. The message comes across as purely “ceremonial,” viewed against that background.

Nonetheless, its import is clear. By making his voice heard on the Libyan crisis and calling for a peaceful, negotiated settlement to it instead of the ongoing military bombardment, the Pope sees things at a higher level than the belligerent and politically immature leaders of the United Nations, the United States, Britain, France, and Italy who have allowed their temperament (against Gaddafi) instead of reason to control their actions. These are leaders who are proud of the military capabilities of their countries and will not hesitate to make that known to the whole world.

But massing up military hardware in the Mediterranean Region in a futile show of force—or deploying such hard-hitting armaments to destroy a sovereign country's infrastructure and human life with impunity—will not help them solve the problems that their citizens put them in office to tackle. It is just an empty display of arrogance and belligerence, which only goes to expose the frailties and foibles of the human self. In the end, brains (good sense and sound judgement) will prevail over sheer brawn. That's what Pope benedict's message entails. Shame to empty brawn!!

Since the eruption of the armed insurgency in some towns and cities in the eastern part of Libya that are traditionally hostile to Muammar al-Gaddafi, the argument has been made that the Libyan crisis cannot be resolved militarily. But puffed up with the pride of military superiority and the desire to devastate Libya's military/civilian infrastructure—and thereby, cripple the Libyan leader's military capabilities and neutralize any growing strength as a strong anti-West voice in the Mediterranean Region and Africa—the partners in the International Coalition chose the wrong option. For obvious reasons, the problem hasn't lent itself to solution through the military option

The wrong premise from which they began operating is a major part of the problem:

i. By choosing the military option, meaning that the West has only one objective—to destroy the military command and control infrastructure of the Gaddafi government and render it vulnerable to elimination

ii. By taking sides in the conflict, which made the West the fighting force on which the rebels have relied and will continue to do so for nothing.

They failed to realize that no one can resolve a conflict between two parties if he enters the turmoil, taking sides and implementing premeditated plans of action in support of that side. Anything of the sort will rather inflame passions and strengthen the resolve of the party that feels threatened. And that's exactly what the West has done to create credibility problems for itself.

Even before embarking on their military campaign of devastation, the leaders of the West had come out to declare that “Gaddafi must go!” and followed up with overt operations against his government. This blinkered approach made the West's moves a complete non-starter right from scratch.

Now that voices of reason have begun emerging to counteract the military option being used against the sovereign state and legitimate government of Libya, there is nothing left for the West to do but to act decisively to end the hostilities there and allow for peaceful, negotiated means to resolve the crisis. It is only a negotiated settlement that can lead to an amicable resolution of the conflict.

NATO can continue enforcing the “no-fly zone” mandate but must cease further destruction of Libyan infrastructure, especially if there is no immediate indication that any such installation is being used to hamper the resolution of the conflict. That is, if it is being used to further create humanitarian problems. Otherwise, what justification should anybody have to destroy the assets of the Libyan state under the guise of enforcing a so-called UN Resolution 1973? Enforcing the “no-fly zone” mandate must not be a pretext to bombard pro-government capabilities to pave the way for the rebels' advances on territories under the control of the Libyan government.

As some of us have kept saying all along, the continued fighting in Libya is the result of the support that the West is giving the rebels to enable them to sustain their armed insurgency. If the West suspends this material assistance to create the impression that the rebels will no more be led into falsely believing that they can overthrow Gaddafi by military means, the fighting will lessen. Gaddafi cannot sustain the military action if he knows that he has nobody to fight. If the rebels return to their original status as civilians, they will be treated as such and not as armed insurgents creating trouble in/for the country.

Already, it is only in Misrata that there is serious fighting. Latest reports have it that the pro-Gaddafi forces have even withdrawn at the request of the tribal leaders who are angry at the disruption of normal life in Misrata. They have given an ultimatum to the rebels to leave Misrata or be forced out by them. This ultimatum will take the fighting to a whole new level if the rebels defy the ultimatum and the tribal leaders make good their threat to attack them with their own forces. In that sense, then, the very tribal or civil war that will worsen the Libyan crisis will begin.

The Pope has spoken, asking for the fighting to stop and efforts begin immediately toward dialogue and a negotiated settlement of the crisis. This call has come at a crucial time in the process and must be obeyed if the West is really interested in the restoration of normalcy to Libya. Whether they want to admit it or not, for as long as no winner seems to be emerging in the fighting going on in Libya, the indications are clear that the military option has failed them.

The reality on the ground should not escape them. So far, the rebels have been stuck in Benghazi, Ajdabiya, and other settlements in the East; they are occupying a part of Misrata in the West. Libya has more cities and towns and settlements than what the rebels regard as their territories. These settlements outside the rebel-controlled areas are in the majority and under the control of the Gaddafi government.

If the West and the rebels insist on the military option, do they think that they will sweep across the length and breadth of Libya, fighting the pro-Gaddafi forces everywhere until they capture all those settlements, including Tripoli? Or that when they mount more military operations, their actions will encourage those in the settlements under Gaddafi to rise up against him and pave the way for their easy entry into those settlements? And how soon do they think such developments will take place?

As of now, the conflict is grinding steadily to a stalemate, which will not take long to materialize. In that circumstance, the best move to make is to announce a complete ceasefire for all the fighters to withdraw from wherever they may be and make room for those with the requisite negotiation skills to take up the mantle from there. That's the essence of Pope Benedict's message, which should sink.

Nobody should be deceived into thinking that valorizing the armed insurgency and supporting the rebels will solve the problem that has destabilized Libya since February 16. It won't; and that's why the visit to Benghazi by the Republican Senator John McCain to commiserate with the rebels and call them “heroes” deserves condemnation.

As The New York Times reported today, Mr. McCain's enthusiasm is apparently not broadly shared in the Republican Party. The newspaper said that “At the same moment Mr. McCain was cheering on Colonel Qaddafi's opponents, Representative Michele Bachmann of Minnesota, the Tea Party favorite weighing a run for the presidency, declared that the president (Barack Obama) was foolish to support rebels who include 'elements of Al Qaeda in North Africa and Hezbollah.'”

These are interesting perspectives on the issue; and that's why the West must re-think its strategies and give Pope Benedict's call an immediate attention. His is a strong voice of reason that supersedes the sentiments and wild expectations of the political leaders controlling the operations of the International Coalition. That voice of reason must be obeyed.