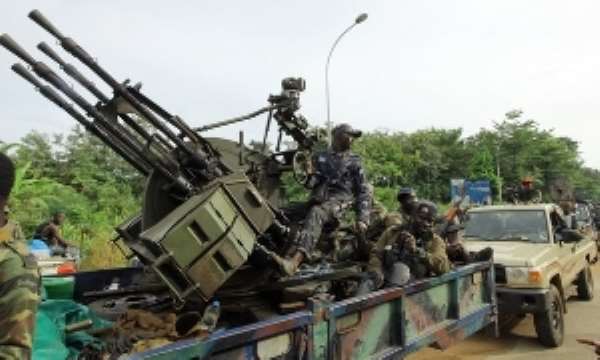 Ivory Coast President Alassane Ouattara has ordered all soldiers to return to their barracks as he tries to restore normality after months of unrest.

He said that law and order would now be enforced by the police and gendarmes.

He took power last week after his forces arrested his rival, Laurent Gbagbo, who had refused to concede defeat in last year's elections.

But some pro-Gbagbo militias continue to operate in parts of the main city, Abidjan.

Earlier this week, two rival group of pro-Ouattara forces clashed in the city - the "Invisible Commandos" which had taken control of parts of Abidjan and the Republican Forces who had swept across the country from their northern bases in March.

"As commander-in-chief of the army, I order you to pull all combat units to their barracks and bases of origin, whether that is in the north or the south," Mr Ouattara told senior generals from both sides on Friday, reports the Reuters news agency.

The BBC's John James in Abidjan says the decision to send troops back to the barracks is not without it risks, but it shows many of the northern ex-rebel soldiers that brought Mr Ouattara to power are proving as much a weakness as a strength in Abidjan.

Now most of the fighting is over, the often ill-disciplined force is accused of looting and perceived as a threat by some civilians, he says.

But he says an elite unit of the northern forces is likely to remain in the city to work alongside the UN peacekeepers guarding the new government.

The return of the police to the streets will encourage people to go back to work and businesses to reopen in the world's main cocoa producer, our correspondent says.

He also said that 5,000 members of the Republican Forces would be integrated into the army.

Mr Ouattara has been receiving pledges of allegiance this week from senior military officers and the heads of main institutions at Abidjan's Golf Hotel where he has been based since the post-election crisis began.

On Thursday, President Ouattara said banks should open next week and that by the end of the month the normalisation process should be a reality.

He is to be officially sworn in as president in the second half of May, in the official capital, Yamoussoukro.

Our correspondent says a national unity government will then be announced, followed by parliamentary elections before the end of the year.

Akufo-Addo Has Turned Ghana Into 'Hell-Hole Instead Of Parad...
19 minutes ago