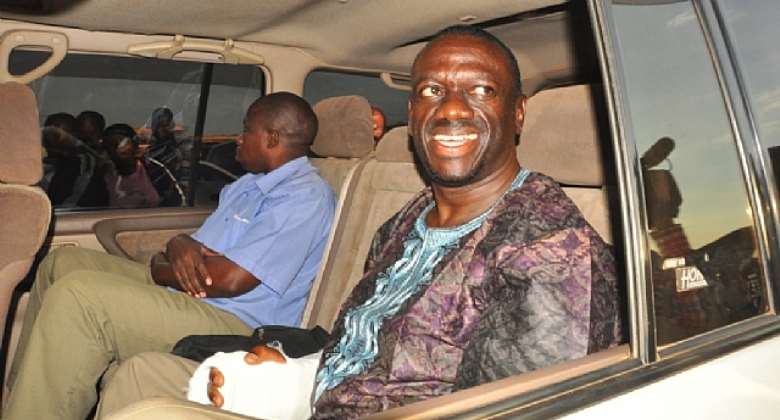 Apart from Dr. Olara Otunnu, who managed to go on with a “Walk to Work”, in protest of high prices of essential commodities, the rest of the opposition leaders will spend the Easter festivals behind bars, in an East African country.

Knowing that most Ugandans don't know their Universal Human Rights and fearing that Dr. Otunnu if blocked will let the cat out of the bag; he was tolerated to walk and given police shepherds to carry on with a “Walk to Work”, campaign. The Uganda People's Congress (UPC) President successfully walked to his office with no interruption by the state machinery until he arrived to his office at Uganda House in Kampala.

“I know Museveni would not dare restricting the movements of Dr. Olara Otunnu. He knows what Otunnu might cause him internationally. This is a man who survives by deceit, because of the ignorance of the local people,” a prominent journalist in Uganda who preferred not to be named for fear of retribution told this newspaper. The journalist argues that, knowing what has recently happened to other African dictators, Museveni cannot risk his power by tossing, the former top UN diplomat Dr Otunnu, the way he [Museveni] is ordering the clobbering his former physician during the 1980s bush war.

“You know Museveni is canning man, he knows Besigye can be pushed, but that cannot work on Otunnu,” said the journalist, adding: “My friend, how many times has he been summoned to the CID and challenged the detectives.”

Last year, Dr. Otunnu explained to the CID officer then delegated to deliver the police summons that had been served to him about criminal defamation did not then existed in the criminal code of the country. Not like Dr. Besigye and other politicians who have been harassed by the Uganda police forces, Dr. Otunnu advised the police to stop being used by Museveni to achieve his cling on power.

Unlike the UPC President Dr. Otunnu, Dr. Besigye was arrested, brief detention at Wandegeya police station, bundled into a mini-bus full of security operative and driven in towards Nabweru court 4 miles before whisked away to Nakasongola prison about 85 miles away from the capital Kampala, a move critic described as psychological torture.

Besigye had phased a twice-weekly protests in which he walks to work to deplore the rising fuel prices and other essential commodities.

This Thursday he drove half way where the two litters of fuel exhausted and left his car near Mulago two and half miles from the capital-Kampala, this prompted hundreds of people gathering but the police did not let them near the doctor.

Ugandan President Museveni has earlier warned he would not accept any protest and had ordered the police take action when the march neared Mulago hospital.

Away from the capital-Kampala, in the southern town of Masaka 82 miles south of Kampala, police shot dead a two and half-year-old toddler. Juliana Nalwanga, a daughter of Aloysius Walusimbi from Kitaka Zone was shot in the head, according to a medical doctor at the hospital, Dr. Florence Tugumisirize: “The head was completely shattered by the bullet.”

Several protesters sustained injuries before they were rushed to the hospital. The entire town shops remained closed as armed soldiers from the nearby army barracks closed in to clobber unarmed civilians who dared to protest against the rising fuel prices.

India's sinking hill town, a casualty of the warming Himalay...
41 minutes ago