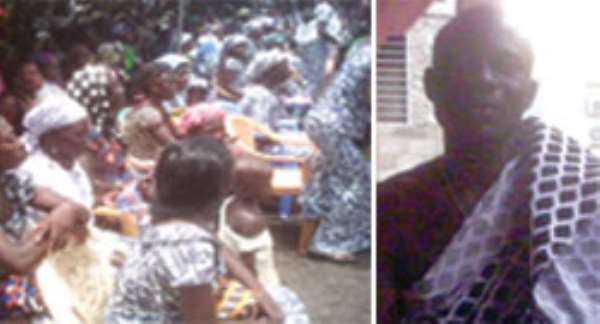 The chiefs and people of the Dodi-Adzade Electoral Area in the Kwahu- North-District of the Afram Plains have organised a durbar in honour of the Assembly Member of the area, Mr. Moses Toklo, for his hard work and dedication to duty, which had enabled him to effectively serve the people over the years.

The chiefs and people, in appreciation of the work of Mr. Toklo, installed him Development Chief of the area, under the stool name 'Togbe Nutifa Fia II,' which literally means King of peace. They also presented a citation to him in honour of the contributions he had made towards the development of the area.

Addressing the durbar, the Chief of Dodi-Adzade, Togbe Tsatsu Etsi II, who was full of praise for the Assembly Member, stressed the need for Ghanaians to adopt the culture of appreciation of the good works of people who have distinguished themselves, to enable them do more in promoting the development of their respective areas.

Togbe Atsu Etsi observed that there were many hard working people like Mr. Toklo all over the country who needed to be encouraged to work harder than before, because the refusal to appreciate the works of people could likely result in the low morale of these persons.

The Dodi-Adzade Chief said the chiefs and people of the area had decided to honour Mr. Toklo, even though he was no more responsible for the Dodi-Adzade area, because the people had recognised the role the former Assembly Member played, which had help in addressing most of the development challenges confronting the people.

Togbe Tsatsu Etsi mentioned a number of development activities brought to the area through the work of Mr. Toklo and mentioned the establishment of a Youth Training Center under the National Youth Employment Programme (NYEP), through the support of the Member of Parliament for the area, Mr. Emmanuel Aboagye, the provision of a clinic, rehabilitation of classroom blocks, and helping to bring teachers under the National Youth Employment Programme to the area.

Togbe Tsatsu Etsi urged Ghanaians to help promote hard work and productivity, through the reward system for workers who distinguish themselves at their work places, and commended Mr. Toklo for the selfless and dedicated service rendered to the people for the past eight years, and asked him to support the new Assembly Member for the area, Madam Vivian Hoviade, to work effectively.

Mr. Moses Toklo thanked the chiefs and people of Dodi-Adzade for the honour done him, and promised to continue to support the new Assembly Member to work more effectively to promote the development of the area, and urged her to be committed to the job.