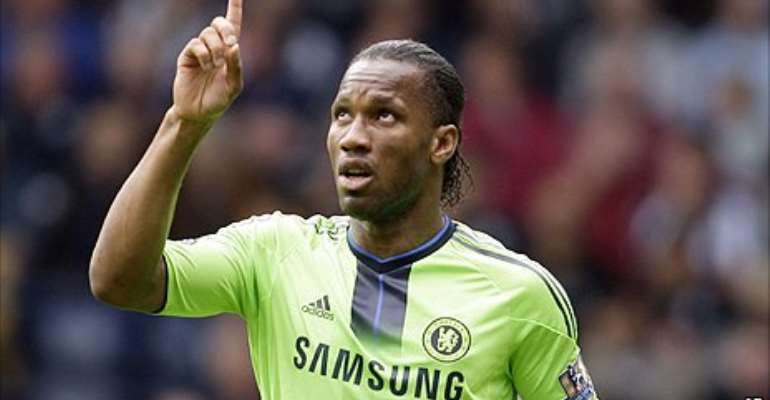 Drogba was a key factor in Chelsea's win at the Hawthorns


Didier Drogba showed misfiring Chelsea team-mate Fernando Torres the route to goal as he spearheaded a dominant Blues side to victory at West Brom.

Peter Odemwingie raced clear and dinked the ball over Petr Cech for the Baggies before Drogba drove in a shot to level.

Home keeper Scott Carson could only parry a Drogba strike to Salomon Kalou, who sidefooted in a second for Chelsea.

And Frank Lampard guided in a third for the visitors, who also hit the crossbar through a deflected Kalou shot.

Torres came on for Drogba after 82 minutes but his goalscoring drought continued as he had a goal ruled out for offside, as well as mistiming a shot when unmarked 15 yards out.

Drogba had played a part in each of Chelsea's goals and the striker's performance will only heighten the belief that Blues boss Carlo Ancelotti made the wrong decision in preferring Torres to him in the Champions League defeat at Manchester United in midweek.

Torres was hauled off for Drogba at half-time at Old Trafford as he extended his time without a goal to 862 minutes in total and 693 minutes in a Chelsea shirt.

Drogba scored to no avail at United and, despite fresh speculation linking the 33-year-old with a departure from Stamford Bridge, he started at the Hawthorns on Saturday.

The fact that the Ivory Coast international had scored seven career Premier League goals against West Brom might have had a bearing on Ancelotti's decision as his side tried to recover from their Champions League hangover.

They were facing a Baggies outfit who went into the match on the back of a seven game unbeaten run which had lifted them seven points clear of the drop zone, and the hosts continued their recent good form as they started with confidence.

This was epitomised when James Morrison, Jermoe Thomas and Odemwingie combined after 17 minutes, with the latter nonchalantly finishing the move to give the Midlands club the lead.

The advantage lasted a mere five minutes as some shoddy defending and poor goalkeeping contributed to Chelsea's equaliser.

Diving Baggies keeper Carson failed to reach a Malouda ball across his six-yard box and left-back Nicky Shorey could only poke a clearance straight to Drogba, who fired in the leveller.

Carson again failed to cover himself in glory four minutes later when he parried a long range Drogba shot to Kalou, who angled an effort straight back past the Baggies keeper to give Chelsea the lead.

Lampard had a 30-yarder tipped over before he extended the visitors' lead.

Drogba released Malouda down the left flank and the winger pulled the ball back for Lampard to pick his spot for Chelsea's third just before half-time.

Chelsea had reverted to a 4-3-3 formation for the game, with wingers Malouda and Kalou flanking striker Drogba, and the formation was pivotal in Chelsea's domination.

Drogba led the line with power as well as a degree of panache, and even found time to block a goalbound Jonas Olsson header at the other end.

Chelsea should have put the game out of West Brom's reach as they continued to carve out a number of chances.

But Malouda had a shot fended away by Carson and a deflected strike by Kalou came back off the crossbar, while the visitors also squandered some promising situations.

Torres eventually came on and thought he had scored his first Chelsea goal when he latched on to a Malouda pass, rounded Carson and slotted in, only for the offside flag to deny him.

The striker also had a chance when he was found unmarked by a Malouda free-kick but the Spaniard horribly sliced his shot.

Nevertheless, Chelsea moved to within eight points of Premier League leaders Manchester United as they inflicted a first defeat for Roy Hodgson since he took over at West Brom.