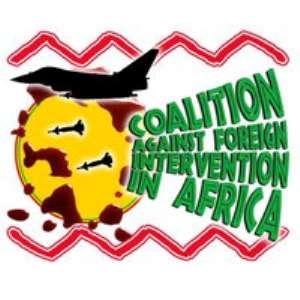 Mr Kwesi Pratt, Jnr., has re-affirmed the determination of Africans to resist any foreign intervention in Africa. He was speaking on Tuesday, 12th April, 2011, in a demonstration organised by the Coalition Against Foreign Intervention In Africa (CAFIA).

Below are the excerpts:

Listen to the Managing Editor of the Insight newspaper and also member of the Committee for Joint Action(CJA),Kwesi Pratt Jnr addressing the Coalition Against Foreign Intervention In Africa (CAFIA) demonstrators at the Nkrumah Circle in Accra on Tuesday April 12,2011. This Demonstration was held after Ivory Coast leader Laurent Gbagbo was arrested.

We are sending a signal to the world that the African people will resist any attempt to recolonize them again!

We want the world to know that Babylon is coming down and Babylon will collapse!

Our message is a very simple message: African patriots, Pan-Africanists, Nkrumahists, and progressive forces and the forces of socialism will continue the resistance against neocolonialism!

We will resist foreign intervention!
Kwesi Pratt, Jnr.
Speaking at the inaugural demonstration of the Coalition Against Foreign Intervention In Africa (CAFIA), Nkrumah Circle in Accra, Ghana on Tuesday April 12,2011