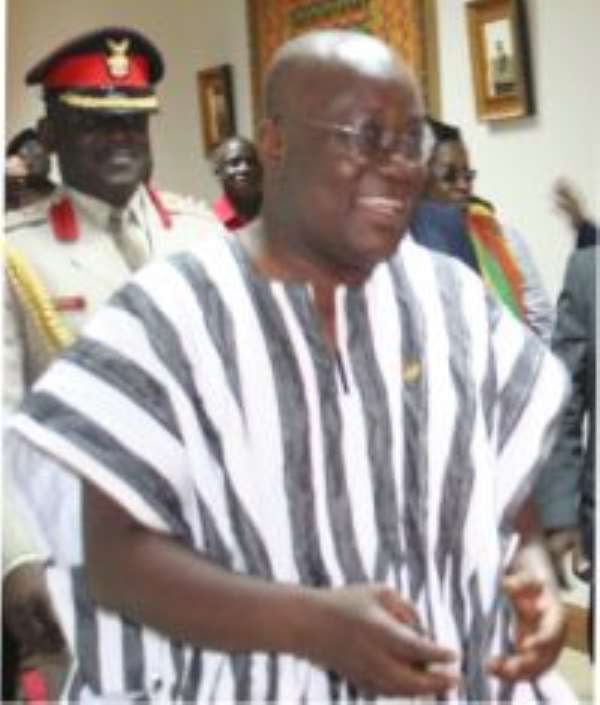 The 2012 Presidential Candidate of the New Patriotic Party has welcomed this week's developments in Cote d'Ivoire which have resulted in the removal of Laurant Gbagbo from power.

In an exclusive interview with the New Statesman, Nana Akufo-Addo, who, as Foreign Minister, played a central role in helping to resolve the Ivorian crisis between 2003-2007,commended President AlassaneOuattara, for “sending out very positive signals for the crucial task ahead of uniting a tortured nation. I commend him for reassuring the Ivorian people and the international community of his commitment to unite the country and restore hope.”

In the view of the NPP flagbearer, the attention of the Ouattara administration “should be to promote reconciliation amongst the people who have lived in a virtual state of emergency for a decade.”

Gbagbo's arrest on Monday followed weeks of bloodletting and mayhem in the West African country, fuelled by his refusal to accept the verdict of elections held last November.

The game is up now for Gbagbo. Much of the Ivorian army supporting him deserted to Ouattara's side or simply melted away. The latest image of Gbagbo is of him looking rather terrified in a room in the Golf Hotel.

In a television address to the nation, Mr Ouattara pledged to give his predecessor a “dignified treatment,” and called on fighters on both sides of the conflict to lay down their arms.

Nana Addo agreed, saying, “Mr Gbagbo must be treated with dignity and his supporters made to feel very much a part of the rebuilding process in the country. That's why I have been impressed with the messages coming so far from President Ouattara.”

But, according to Ghana's former Foreign Minister, while this week's military intervention may have brought to an end the likelihood of outright civil war, the hard work for Ouattara is only beginning.

The first has to do with Gbagbo's own fate.

“I fully support Mr Ouattara's policy of insisting on restraint. The way Mr Gbagbo is handled should be measured by the wider fabric of national interest. How to secure a brighter and peaceful future for Cote d'Ivoire.”

Nana Addo has described the action of Gbagbo not to go after losing last November's election as “causing a major setback to a decade of deliberate efforts to ensure lasting peace and political stability in Cote d'Ivoire. It is to this task that major attention must be given now,” he stressed.

Mr Ouattara has promised to set up a truth and reconciliation commission. Nana Addo considered this “a very wise decision which should be given all the support for its success. Reconciliation is perhaps the single most essential item in the complex but necessary programme for the future of la Cote d'Ivoire. The opportunity must not be lost,” said the man who spearheaded the establishment of Ghana's own National Reconciliation Commission in 2001.

The NPP flagbearer added, “The important process towards lasting peace, reconciliation, unity, stability and economic revival for Cote d'Ivoire requires deliberate actions from the new leadership that promote inclusiveness. I am hopeful that President Ouattara will live up to his promise on this front.”

Ghana's President Mils was earlier in the year criticised by the NPP leader for not showing decisive leadership on Ghana's position in the Ivorian crisis.

Yesterday, he called on President Mills “to take all necessary steps that will ensure the restoration of trust and confidence between our two neighbouring countries.”

Nana Addo has also called on the international community, particularly ECOWAS, AU, EU and UN, to support the Ivorian leadership and people in their efforts to return the country to normalcy.

He described the restoration of the democratic will of the Ivorian people as “a major boost to democracy in Africa. But, there are useful lessons that both our regional and continental bodies can learn from this experience, especially, on how to deal with possible future acts of intransigence on the part of defeated leaders,” the presidential candidate of Ghana's main opposition leader stated.

“Among the immediate tasks is to get relief items to tens of thousands of internally displaced people in the country who are said to be in real need of basic items,” Nana Addo pointed out.

Over a million Ivorians are said to have been displaced by the recent conflict.

In a related development, the UN World Food Programme (WFP) said it is planning airlifts in the coming days to provide food to tens of thousands of internally displaced people in la Cote d'Ivoire and refugees in neighbouring Liberia.

The Innocent Flower Looking Akufo-Addo Is The Mother Serpent...
19 minutes ago