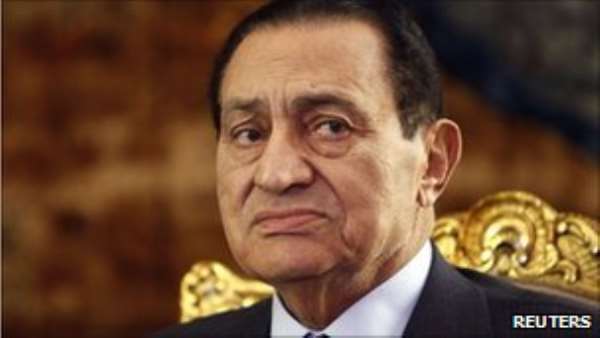 He was taken ill while being questioned by prosecutors over allegations of corruption and the killing of hundreds of protesters, the reports say.

The manager of the hospital in Sharm el-Sheikh was earlier quoted saying the 82-year-old's condition was stable.

Mr Mubarak stood down on 11 February following an 18-day popular uprising against his rule.

Two days ago he was summoned by the public prosecutor. State TV quotes medical sources as saying he has refused food or drink since.

Mr Mubarak's two sons, Alaa and Gamal, are also under investigation and are being questioned at the prosecutor's office in al-Tor in South Sinai governorate, where the former president is said to have been when he suffered the reported medical emergency.

Scuffles
"There is a state of confusion inside the hospital and only patients are allowed in," Ashraf Swaylam, a news reporter for the state-run station Nile TV, said earlier.

The hospital was accepting no patients except for emergency cases, another local media report said.

Protesters picketed the hospital, denouncing the president and carrying a sign reading "Here is the butcher", AP news agency reported. They scuffled with supporters of Mr Mubarak.

Mr Mubarak underwent gall bladder surgery in the German city of Heidelberg last year and there were reports that he had remained in poor health, although his aides had denied this.

A BBC correspondent says it is understood that the former president's doctors had asked Egypt's ruling military council for permission to send him back to Germany for treatment, but that this was refused.

Mr Mubarak has been banned from leaving the country, along with his sons and their wives, and the family's assets have been frozen. He denies any wrongdoing.

Square cleared
Correspondents say he has been keeping a low profile in Sharm el-Sheikh, a Red Sea resort, after fleeing to his holiday villa there when he was overthrown.

In a separate development, soldiers and police are said to have ended a five-day occupation of Cairo's Tahrir Square by hundreds of protesters.

They had been demanding civilian rule and swifter prosecution of disgraced former officials, principally Mr Mubarak.

There were clashes on the first night of the occupation and tensions had remained high.