Kenya's PM appears at ICC in the Hague 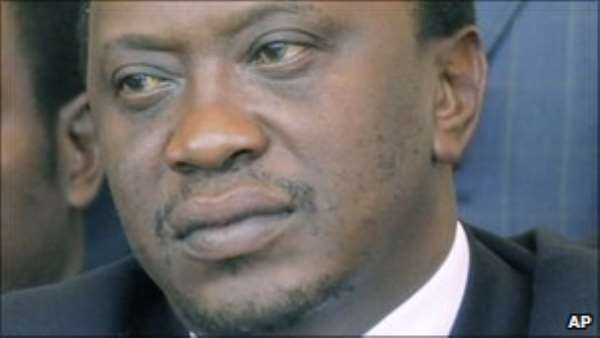 
Kenya's Deputy Prime Minister Uhuru Kenyatta and two others have appeared at the International Criminal Court in The Hague, accused of links to 2007-8 post-election violence.

The three are seen as allies of President Mwai Kibaki.

All six are accused of crimes against humanity during the violence in which some 1,000 people died.

The violence broke out after supporters of President Kibaki were accused of trying to rig the presidential election in December 2007.

The ICC judges said hearings would be held on 1 September and 21 September to decide whether the men would stand trial. If convicted, they could face life imprisonment.

All six deny wrongdoing.
Arrest warning
Mr Kenyatta, who is also finance minister and the son of Kenya's founding president, is accused of organising a vigilante group which carried out attacks after the disputed election.

Alongside Mr Kenyatta were secretary to the cabinet Francis Kirimi Muthaura and former police chief Mohammed Hussein Ali, who were also accused of organising attacks on those seen as supporters of Mr Odinga.

They were not formally charged but face allegations of murder, deportation, persecutions and rape.

"It came to the knowledge of the chamber through following some articles in the Kenyan newspapers that there are movements towards retriggering the violence in Kenya, by way of delivering dangerous speeches," she said.

"This might prompt the chamber to replace the summonses to appear with warrants of arrest."

Mr Ruto - who has fallen out with Mr Odinga since 2007 - told the court the allegations "made here sound to me like they can only be possible in a movie".

Kenya had asked the ICC for a deferral, and says it is now able to investigate and prosecute these cases itself, although the government previously declined to set up a tribunal, which is why the ICC intervened.

Some 40 Kenyan MPs gathered outside the court in The Hague to provide moral support for the accused on Thursday.

Kenyan television stations have interrupted their normal programmes to carry live broadcasts of the court proceedings from The Hague.

The BBC's Will Ross in Nairobi says with elections due again next year, any trials at the ICC could potentially alter Kenya's political landscape.

Both Mr Kenyatta and Mr Ruto are seen as likely candidates to stand in the 2012 presidential elections, but any criminal charges could effectively end their political ambitions.

The ICC alleges that a criminal plan was put in place in the Rift Valley for supporters of President Kibaki to be attacked after the election.

ICC prosecutor Luis Moreno Ocampo has said that in retaliation, police were given the green light to use excessive force and a vigilante group was organised to attack civilians.

The violence brought the country to the brink of civil war, with long-standing ethnic and economic rivalries ignited by political divisions.

One of the worst incidents saw a church where about 100 people had sought sanctuary set on fire, killing dozens inside.

The violence ended after former UN Secretary General Kofi Annan brokered a peace deal between the two presidential rivals. As part of the deal, it was agreed that perpetrators would face justice in Kenya or at the ICC in The Hague.

The organisation Human Rights Watch says the appearance of the six Kenyans in The Hague is an important test of their co-operation with the ICC.