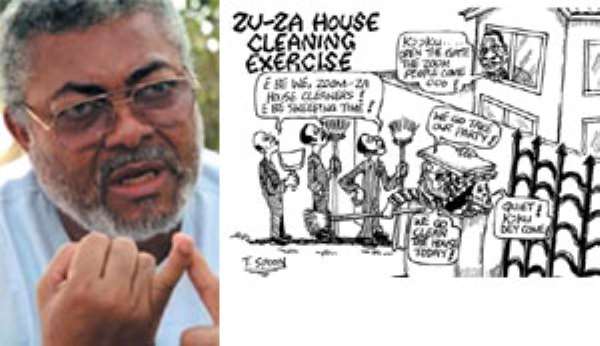 THE FOUNDER of the ruling National Democratic Congress (NDC), Flt. Lt. Jerry John Rawlings, met with the party faithful in Kumasi yesterday, and gave them a single message:

'Go and tell Prof. Mills Enkoyie,' he screamed to the delight of his listeners.

According to the former president, contrary to the moral principles that underpinned the formation of the NDC, the Mills administration had resorted to the dishing out of money to destroy the moral fibre of the party.

He said he had picked up signals which indicated that the values of principles of truth, integrity and justice, which were the core values of the NDC, had been jettisoned

The former head of state said there was the creeping disquiet that both the nation and the party were suffering under the leadership of President Mills.

Without stating openly, the former President is reported to have joined the campaign team of his wife, Nana Konadu Agyeman Rawlings, with the intention of unseating President Mills during the party's primary.

He accused the current administration of failing to prosecute the party's manifesto since coming into power, observing that it would be difficult for him to lead the campaign in the 2012 general elections to victory.

The NDC Founder argued that instead of the President Mills' administration leading the quest to seek for justice for the people of Dagbon, and to probe, what he termed, the corrupt activities of the previous administration, the government was engaged in further corrupting the system.

In addition, Mr. Rawlings stated that instead of fighting for truth and integrity, leading government officials are rather destroying the moral fibre of the NDC, with the inducement of money, against the party's true core values.

The former president, in the company of his spokesperson, Mr. Kofi Adams and a host of core NDC activists in the Ashanti Region, stated clearly, that the future of the NDC was doomed, unless the members and activists took the bull by the horns and changed direction.

'After two years in office, we saw what happened during the district assemblies elections. Obviously, it is not a sign of good performance. When you see this, what is the future of the NDC in 2012?' he asked.

Speaking in corrupt Twi, the former President accused the President Mills administration of failing to set up forensic investigations into the activities of municipal and district chief executives under the New Patriotic Party (NPP) administration of ex-President John Agyekum Kufuor.

Mr. Rawlings, who demonstrated some kind of concern and bemoaned the level of deprivation among the citizenry, also accused the Kufuor administration of waging a propaganda war against the NDC, with a motive to destroy it.

He said the NPP, after coming into power, poisoned the atmosphere against the NDC, to the extent that police officers, Bureau of National Investigations (BNI) operatives and other agencies were deployed to harass him and other NDC officials, with the sole aim of destroying them.

He accused the former president of appointing some judges, with the motive of jailing former NDC officials on allegations of corruption, and wondered why the NDC was reneging in its quest to investigate various contracts awarded by the NPP.

Mr. Rawlings further repeated his mantra of rigging allegations against the NPP. 'God knows that the NPP rigged the elections. They themselves know that they did not win the elections.' He claimed that during the previous regime, the costs of contracts awarded were multiplied by three times, to the disadvantage of the government.

'Kufuor knows that he was corrupt, and that was how he has put some judges to jail our people. Today, we need to thoroughly investigate the cases,' Rawlings screamed.