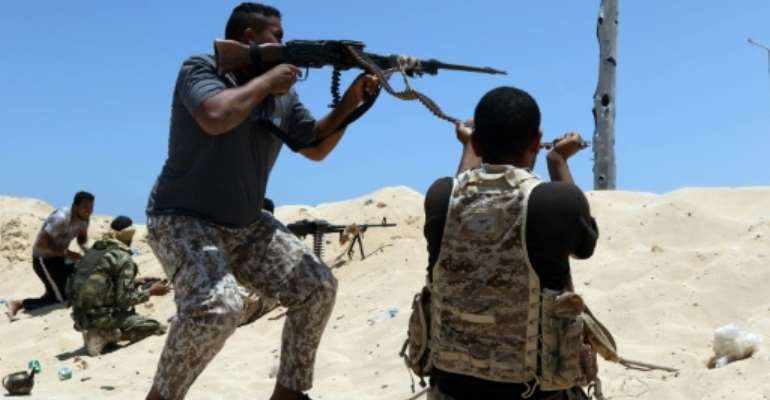 Libyan pro-regime forces launched an offensive to retake Sirte in May 2016. By Mahmud Turkia (AFP)

Tripoli (AFP) - Forces loyal to Libya's unity government said Tuesday they were advancing inside the jihadist stronghold of Sirte, following the first US air strikes on Islamic State group positions in the city.

The IS bastion, located just across the Mediterranean from Europe, has been shaken by weeks of fierce clashes between jihadists and fighters allied to the Tripoli-based Government of National Accord (GNA).

The city, 450 kilometres (280 miles) east of Tripoli, has been controlled by IS since June 2015, and its loss would be a major blow to the jihadists, who have faced a series of setbacks in Syria and Iraq.

IS has transformed the city into a training camp for Libyan and foreign militants, terrifying residents with public amputations and executions.

The pro-GNA forces said Tuesday they had gained full control of Al-Dollar, a central residential district in Sirte, after clashes that killed five of their members and wounded 17.

The announcement came after US aircraft launched five air strikes on Monday against "several targets in Sirte, hitting IS members and vehicles", the GNA forces said in a statement.

The Pentagon said the raids were launched in response to a request from Fayez al-Sarraj, the head of the unity government.

It was unclear whether the strikes had helped the GNA fighters to gain control of Al-Dollar.

IS took advantage of the chaos in Libya after the 2011 ouster of longtime dictator Moamer Kadhafi to increase its presence in the oil-rich country.

The jihadists have claimed deadly attacks, including beheadings, and targeted foreign embassies.

Sarraj's unity government emerged as the result of a UN-brokered power-sharing deal in December, but it has struggled to assert its authority across Libya.

Mattia Toaldo, a Libya expert with the European Council on Foreign Relations, said the GNA needed air support to retake Sirte from the jihadists.

"Even though they have an air force, it is not comparable to the support they can get from the US," he said.

"Of course, this also has political implications," Toaldo said.

A rival administration based in the country's far east has refused to cede power to Sarraj's government since he sailed into the capital under naval escort in March.

On Monday, Sarraj visited pro-government forces in Misrata, 190 kilometres to the northwest of Sirte, his office said.

More than 300 pro-GNA fighters have been killed and over 1,500 wounded since the start of the battle for Sirte, according to medical sources in Misrata.

Forces supporting Sarraj's government entered Sirte on June 9, but their advance has been slowed by an IS fightback using suicide car bombs and sniper fire.

The pro-GNA forces are mostly made up of militias from western Libya established during the 2011 revolt.

Pentagon press secretary Peter Cook said on Monday that US strikes in Sirte would continue, without elaborating.

But Sarraj said the American involvement would be "limited in time and will not go beyond Sirte and its suburbs".

It is not the first time Washington has targeted the jihadist group in Libya.

In November 2015, the United States bombed IS leaders in the North African country for the first time, killing one of them.

And in February, a US raid targeted an IS training camp near Sabratha, west of Tripoli, leaving about 50 people dead.

The foreign ministry in Russia, which is carrying out anti-IS strikes in Syria at the request of the Damascus regime, stressed the need for "close coordination (in) the efforts of all countries engaged in the battle against terrorism".

The American raids were carried out at the request of Libyan authorities, it noted.

France, meanwhile, reaffirmed its "full support" for Libya's unity government, seeking to mend fences over the presence of French troops in the east of the conflict-ridden country.

French Prime Minister Jean-Marc Ayrault, speaking to Sarraj by telephone on Friday, also "hailed the decision of the Libyan authorities to appeal for international aid", according to the foreign ministry in Paris.

Paris recognises the GNA, but it also supports anti-IS forces that are loyal to the parliament and government based in the east that are refusing to cede power to the UN-backed administration.