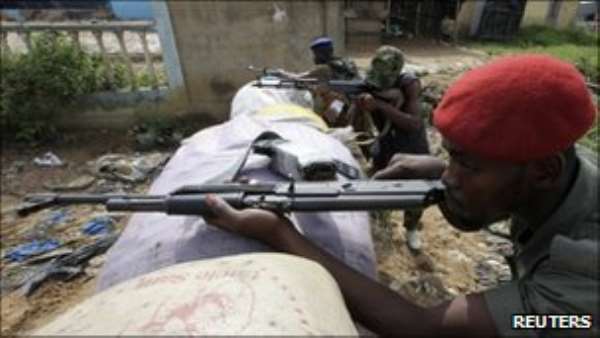 
Fighting has intensified in Ivory Coast's main city of Abidjan as forces loyal to the UN-recognised president, Alassane Ouattara, battle those of his rival, the incumbent Laurent Gbagbo.

Heavy artillery fire has been heard as the troops fight for key sites including the presidential palace.

Further details have meanwhile emerged about the deaths of as many as 1,000 civilians in the west of the country.

Catholic charity Caritas said they had been shot or hacked to death with machetes in a part of Duekoue, controlled by troops loyal to Mr Ouattara.

Looting
There has been fierce fighting outside the presidential palace, the headquarters of state television and the Agban military base on Saturday, with artillery and machine-gun fire echoing throughout the southern city.

Wounded soldiers loyal to Mr Ouattara were seen being rushed to a hospital outside the city, while confident-looking reinforcements headed the other way.

Earlier, another UN patrol was attacked in the Cocody neighbourhood. Five of the former president's troops were hit in an exchange of fire.

One soldier, accompanied by a dozen members of Mr Gbagbo's Defence and Security Forces (FDS), read a statement on state TV calling for the mobilisation of troops to protect state institutions.

Another announcement called on a pro-Gbagbo youth militia to seize control of the two bridges spanning Abidjan's lagoon, which leads to the peninsula where the presidential palace is located.

Millions of civilians are still trapped by the fighting. Small groups have been seen with hands held high, running for safety along deserted streets.

Khodor, a Lebanese resident of the city, told the BBC that he could hear gunfire and there were looters on the streets.

"We have no food or water," he said. "I'm quite calm now, but there are people in tears, we have no idea what will happen or even what is going on."

Henry Grey of medical aid group Medecins Sans Frontieres (MSF) said there had been looting across the city, and warned that there were "groups of armed men looking for an opportunity to profit from the chaos".

The BBC's Andrew Harding in the capital, Yamoussoukro, say the ferocity of the fighting makes it hard to gauge the ebb and flow of the battle.

Mr Ouattara's forces say they are preparing for a final push, but they are clearly encountering stronger resistance than expected.

UN Secretary General Ban Ki-moon told the BBC: "At this time, I strongly urge Mr Gbagbo to step down and transfer power to the legitimately elected president... Mr Ouattara."

Once Mr Gbagbo had gone, Mr Ban said he expected Mr Ouattara to begin the process of reconciliation and restore the rule of law.

Mr Ouattara was internationally recognised as president after winning a run-off vote in November, but Mr Gbagbo also claimed victory and refused to leave office.

Duekoue 'massacre'
The west of Ivory Coast has also seen vicious battles between rival militias and ethnic groups. On Saturday, Caritas said its staff had found the bodies of hundreds of people in Duekoue, and estimated that 1,000 may have died.

The killings occurred between 27 March and 29 March in the Carrefour district, which was controlled at the time by fighters loyal to Mr Ouattara, spokesman Patrick Nicholson told the Associated Press.

"Caritas does not know who was responsible for the killing, but says a proper investigation must take place to establish the truth," he said.

Most of the 1,000 peacekeepers based in Duekoue had been protecting about 15,000 refugees at a Catholic mission there, Mr Nicholson added.

The International Committee of the Red Cross put the death toll at about 800, while the UN said more than 330 people were killed as Mr Ouattara's forces took over Duekoue, most of them at the hands of the rebels. However, more than 100 of them were killed by Mr Gbagbo's troops, it added.

Sidiki Konate, a spokesman for Mr Ouattara's government, said that while some people had been killed in the fighting between the two sides in recent days, there had been no deliberate killings of Gbagbo supporters.

ICRC staff who visited Duekoue on Thursday and Friday to gather evidence said the scale and brutality of the killings were shocking.

Tens of thousands of women, men and children have fled the fighting.

The United Nations human rights office says it has received reports of major human rights violations committed by both sides in the conflict.

West Africa's second biggest economy has been brought to its knees by the conflict, which has sent global cocoa prices spiralling upwards. Ivory Coast is the world's largest cocoa producer.