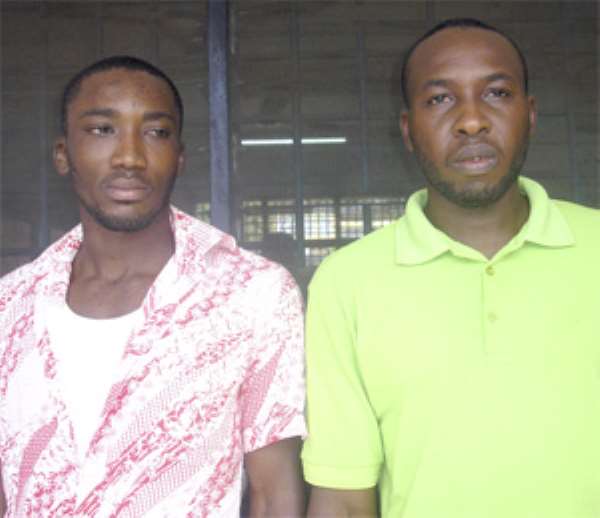 Abass Abubakar, 23, and Iddrisu Darjuma, a carpenter, 24, have been sentenced to 40 years' imprisonment in hard labour for forging documents belonging to the Police and Immigration Services to defraud an American citizen.

The prosecutor, ASP Sekyi, told the court that somewhere in 2009, Abass Abubakar met the victim on an electronic dating site called Date huke-up.

He introduced himself as 63-year-old James, a contractor at Palm-Spring, a suburb of California in the United States of America.

Coincidentally, the victim, Barbara Rich, was also a resident of the same state.

After getting acquainted, Abubakar proposed to Rich, who also accepted.

Later, Rich suggested that her new found love should meet her half way while she drove towards his residence.

Though the accused was resident in Accra, he agreed to the visit.

Two days to the date, he called back to tell Ms. Rich that some promoters and stakeholders of his late father's gold firm in Accra were anxiously looking him to take up his father's position as the CEO of the company, and therefore he would not be able to honour the appointment.

He later informed Ms. Rich that he had been made a shareholder in his father's Gold estate and succeeded in collecting $250,000 dollars in instalment, within a period of one and half years, for buying and shipping gold to her in the USA.

Though he failed to send the consignment, Abubakar further demanded an amount of $4000 to be given to police officers in-charge of the shipment to facilitate the process.

The accused was baited with the said $4000 by the police, which led to his arrest at Circle, in the company of his accomplice, Iddrisu Darjuma aka Mumuni, who posed as the police officer in charge of the shipment of the gold to the victim.

During interrogation, they both admitted the offence but Abubakar denied collecting the said $250,000 from the victim.

He alleged that the victim gave him only $60,000, which he used to furnish his room.

He also used part of the money to buy a flat screen television, a home-theatre system, a laptop and air-conditioner.

The rest was used to tile his room.
The television, laptop and the home theatre were retrieved from his room as exhibits.

The two were sentenced after they pleaded guilty to four counts of defrauding by false pretences, conspiracy to commit crime, possessing forged documents and forgery of official documents.

They were sentenced five years for each count to run concurrently.

They however pleaded not guilty to two counts of defrauding by false pretences and conspiracy to commit crime.

They are to reappear on April 18, 2011.
The Director General, CID, after the conviction of the two, used the opportunity to advice foreigners who want to invest in Ghana to consult their respective embassies and the CID Headquarters in Accra for clarification.