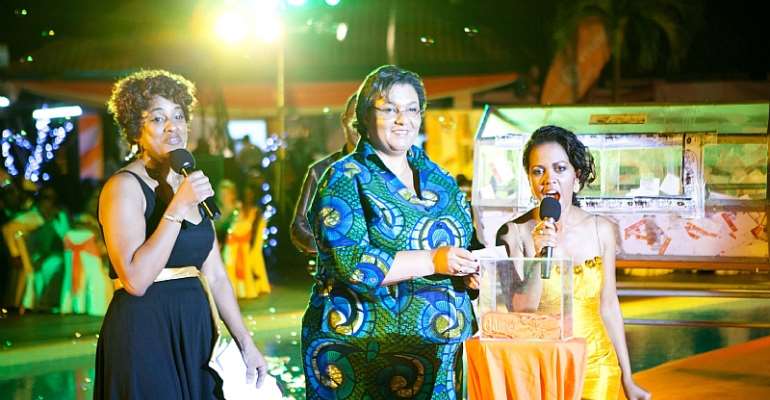 Accra, 30th March 2011: Eric Nii Yarboi Mensah has won the 24-carat 1kg bar of pure gold as the ultimate prize in the six-months exciting Fidelity GO FOR GOLD promotion. Eric, who banks with the Ridge Towers branch of Fidelity Bank in Accra emerged the overall winner in the GO FOR GOLD grand draw. The gold was valued at $73,000 (Seventy three thousand US Dollars). The Fidelity GO FO GOLD promotion was launched some six months ago by wholly owned Ghanaian Bank, Fidelity Bank to encourage the habit of saving among Ghanaians while increasing the customer base of the bank.

Held at the Golden Tulip Hotel, the glamorous event witnessed an evening of great performances and giveaways including expense-paid holiday packages for the second and third grand winners who will get to visit any African destination of their choice. Other prizes included home theatres, BlackBerry phones, iPods, refrigerators, washing machines and many more.

Managing Director of Fidelity Bank, Edward Effah said “the motivation behind the GO FOR GOLD promotion is to encourage the culture of saving and drum home the importance of investing towards ones future. We want to empower Ghanaians to step into the future with more confidence. This comes with planning and preparation. The GO FOR GOLD campaign opened our doors to the general public to work with the best partners for future planning – Fidelity Bank. He also added that Fidelity Bank has doubled the customers base to 41, 000 through this go for gold campaign and will be listing on the Ghana Stock Exchange by 2012 or early2013.”

The GO FOR GOLD promotion apart from offering Ghanaians a unique opportunity to enjoy superior banking, also rewarded customers in cash and in kind. The whole idea is to guide them to financial freedom to enable them pursue their dreams and aspirations.

“Fidelity Bank congratulates all customers and non-customers alike who participated in the campaign. For us at Fidelity Bank, all our customers are winners and we appreciate them. This is not the end of the GO FOR GOLD promotion. We will soon come back with a bigger and more exciting promotion.