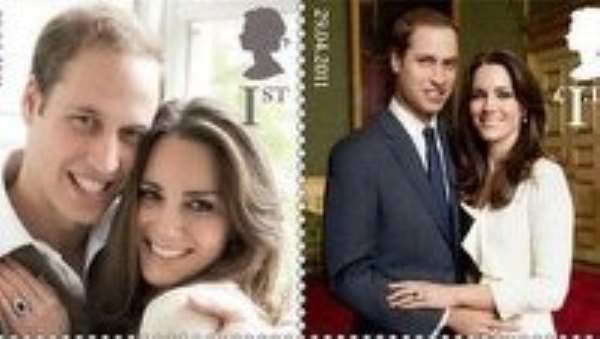 The stamps feature the couple's official engagement photographs and will be available from 21 April, ahead of the wedding on 29 April.

Meanwhile, the Queen's head chef has spoken of his pride at having to create the menu for the wedding reception.

Mark Flanagan was tight-lipped about the canapés but said the best of British produce would be used.

After the service at Westminster Abbey, the Queen will host a reception for 600 guests from the congregation at Buckingham Palace.

In the evening, Prince Charles will host a private dinner at the palace for the newlyweds, plus close friends and family.

Mr Flanagan, who has worked for some of the world's best chefs, including Michel and Albert Roux and Raymond Blanc, has to prepare a range of hot and cold canapés for the reception.

The 43-year-old said his staff of 21 were "excited" about the big day and they were "always conscious" of trying to ensure they upheld people's expectations of dining at Buckingham Palace.

"For a lot of people it will be a once-in-a-lifetime opportunity," he said.

"Certainly from the kitchen side of things we try to encourage everybody to make sure nobody goes away saying 'Wasn't it amazing and didn't you see the gents in red coats and the pictures - but the food wasn't up to much?' - that's not what we'd like."

The stamp sheet consists of two 1st class stamps and two £1.10 stamps. As with all of Royal Mail's commemorative stamps, the Queen has approved their issue, as has the groom himself.

They will be available from all Post Office branches from 21 April, the Queen's birthday.

Stephen Agar, from Royal Mail, said: "We are honoured to be celebrating this very special and historic occasion.

"We believe that that this set of stamps will be very popular with people both in the UK and around the world," he added.

The last issue of Royal stamps created was to commemorate the Queen's Diamond wedding anniversary in October 2007.

I regret connecting the guy who secretly recorded Akufo Addo...
57 minutes ago

Let’s go to swear Nogokpo if you're not corrupt – Fiifi Kwet...
59 minutes ago