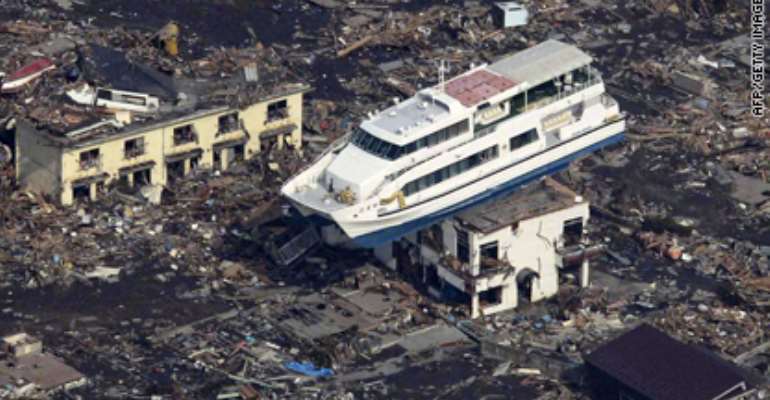 The Japanese government has attacked the operator of a crippled nuclear plant for "unacceptable" mistakes.

The Tokyo Electric Power Company (Tepco) had said radiation levels were 10m times higher than normal before correcting the figure to 100,000 times.

Workers are battling to stop radiation leaks at the Fukushima plant, hit by a quake and tsunami over two weeks ago.

Meanwhile, Japan has lifted a tsunami warning that was issued after another earthquake off its northern coast.

It is not reported to have caused any damage.
A 9.0-magnitude earthquake on 11 March and the powerful tsunami it triggered killed more than 10,000 people and left many thousands more missing.

'Unacceptable'
The mistaken reading at the Fukushima Daiichi plant has called into question the operating company's handling of the current crisis, says the BBC's Mark Worthington in Tokyo.

"Considering the fact that the monitoring of radioactivity is a major condition to ensure safety, this kind of mistake is absolutely unacceptable," government spokesman Yukio Edano told a news conference.

"(The government) has ordered Tepco not to repeat this again," he said.

The government understood the workers were overworked and under stress, he added.

Radiation measurements from a pool of water inside Fukushima's reactor No 2 suggested its fuel rods had suffered a partial meltdown, Mr Edano said.

"The radiation seems to have come from fuel rods that temporarily melted down and came in contact with the water used to cool the reactor.

"Steam may have condensed... carrying water from within the containment vessel," he said

That water is the most contaminated to be found at the plant so far.

Work is continuing to remove the contaminated water from the reactor building; the priority is to ensure that it doesn't seep out into the soil or the sea, our correspondent says.

Tepco apologised on Sunday for the "mistake" in reporting a radiation spike 10 million times above normal.

Tepco said a worker taking the reading in a part of reactor 2's cooling system had no time to confirm with a second reading because the radiation level was so high he had had to leave the area.

"The number is not credible. We are very sorry," said Tepco spokesman Takashi Kurita.

Tepco has been criticised for a lack of transparency and failing to provide information more promptly and for making a number of mistakes, including worker clothing.

Two workers were taken to hospital last week after wading though contaminated water with inadequate protection. They are expected to be released on Monday.

Unease
Japan's nuclear watchdog said the level of radiation in water near reactor 2 was confirmed at 1,000 millisieverts an hour.

"It is an extremely high figure," said spokesman Hidehiko Nishiyama.

The radiation levels are so high, that emergency workers near the contaminated water would have received four times their maximum annual dose of radiation in just one hour.

The nuclear safety agency said levels of radioactive iodine in the sea near the plant were 1,150 times the legal limit. Previous readings reached 1,850 times the usual level.

Emergency workers have now switched to using fresh water as a coolant, rather than sea water.

There had been fears the salt in sea water could further corrode machinery. The fresh water is being pumped in so that contaminated radioactive water can be extracted.

The UN's nuclear agency, International Atomic Energy Agency (IAEA), has warned the crisis could go on for months.

However, the government in Tokyo has said that airborne radiation around the plant is decreasing, so there is no need to extend the evacuation zone.

Tepco's erroneous report has created more confusion around a crisis that is already causing widespread unease in the country, our correspondent says.