Welcome Back! A Goodwill Message by Nana Akufo-Addo 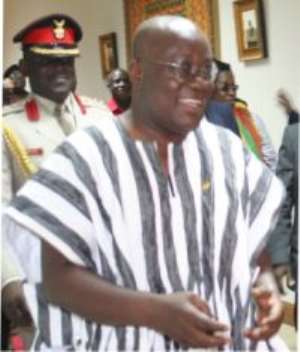 The survival and progress of our democracy depend on free trade in ideas; free and qualitative expression   and competition of options and opinions. The future of a free and prosperous Ghana depends on the depth and width by which we liberalise the mind industry and crucial to this is the role of the mass media.

I am happy to see the return of the Statesman on the newsstands.I am told it never completely folded since it was available online! This, in itself, testifies to the growing influence of the new media and social network engagement in the flow of information today.

My father, Edward Akufo-Addo, first published the Statesman in 1949. I revived it in 1992 to coincide with the coming of the Fourth Republic and I am happy to say that, along with other newspapers, such as the Chronicle , the Independent , the FreePress and the Guide , among others, the Statesman played a critical role in building confidence in Ghana's Fourth Republican democracy, with its bold defence and promotion of freedom of expression and good governance.

Since Sir Charles MacCarthy, governor of the British Gold Coast settlements, established The Gold Coast Gazette, the first newspaper here in 1822, the centrality of the journalist in Ghana's nation building has become more delicate, and far reaching, especially in this new age of the new media.

Things were, of course, less complex when in 1858 Charles Bannerman, son of a princess from the Asante royal family, became the first African to publish a newspaper in West Africa.   His handwritten Accra Herald, which lasted for 16 years, inspired the first media proliferation in our country, with papers such as Gold Coast Chronicle, Gold Coast Independent, Gold Coast Times, Gold Coast and Western Echo .

The 1930s heralded a more radical, self-asserting, anti-colonial brand of journalism with African nationalists like J B Danquah, who established the first daily newspaper in the Gold Coast, the Times of West Africa in 1930, and NnamdiAzikwe editing the African Morning Post in Accra from 1934. It was a hopeless attempt to quench the raging intellectual fire of such brave journalists that the Sedition Bill was enacted, leading to the sedition trial of Sierra Leonean nationalist I T A Walace-Johnson and Nigerian nationalist Azikwe in Accra.

By 1939, the Kumasi-based Ashanti Pioneer was founded by John and Nancy Tsiboe. Ten years later, at the height of the nationalist competition between the UGCC and the CPP,Akufo-Addo established The Statesman , alongside Kwame Nkrumah's Evening News, with each representing the two respective sides to that singular destiny of the people: independent Ghana .

It was not until 1950 that British newspaper tycoon, Cecil King, established the Daily Graphic. It is, therefore, encouraging to see the Statesman returning to play its natural role today in the next vital push for a new kind of Ghana's independence – economic independence through a programme of economic transformation in a free, democratic society in an interdependent world.

The New Patriotic Party is determined to build a new society of opportunities in Ghana. We are determined to transform Ghana's economy and modernize our society, with Ghanaians at the forefront of this necessary project of transformation. We see the media as true partners in this national exercise.

The Statesman , when it was revived in 1992 under the editorship of Yaw AmfoKwakye, HarunaAttah, Ken Bediako and the late Ferdinand Ayim, built a reputation of naming and shaming mediocrity, incompetence, corruption and bad governance, generally and gave space for alternative views to be expressed. Its contribution to nation building in those days of virtual one-party legislature may be fully chronicled by historians one day for a fuller national appreciation.

In the absence of no real parliamentary opposition before 1997, it established itself as the authentic voice of the Danquah-Dombo-Busia philosophy. It continued to, indeed,showin many stories and editorials that it was never shy to criticize the New Patriotic Party when it deemed it necessary` and constructive.

Newspapers are free to take ideological sides. In England, for instance, nobody doubts the stance of the Telegraph as a conservative paper. It is pro-Tory yet it has built its reputation on truth and an uncompromising defence of what it believes in – the values and principles of British conservatism. The same can be said of the leftist newspaper, the Guardian and its historical links with the Labour Party.

Objectivity, some may argue, is an illusion. What is, however, not an illusion is truth. Stay loyal to the truth and your readers will forever be loyal – to you. Write the truth and always delve deep in search for the facts. Keep your opinions consistently principled and sound.

Truth make up the stilts of professionalism in journalism. The truth can help you succeed. Remember to always see the difference between what is in the public interest and what may be of interest to the public.

The philosophy of the Statesman is to protect and promote liberal democracy and that human-centred concept of development in freedom. The responsibility is, therefore, yours to help in ensuring that the principles of democratic accountability, the rule of law, respect for human rights and the promotion of individual liberties and free enterprise are upheld, expanded and deepened. You have an additional responsibility to promote the greater African cause of integration by publishing stories and ideas that promote cross-border understanding and interaction.

Let this paper make role models of those who dareplay to win by the rules, so they can continue to set the pace for others to follow. Temper sensationalism with sensitivity to stories that can help to move our nation forward to a brighter future.

Don't seek to destroy the hard-earned reputation of people with baseless, fabricated stories. Your success will not be based on another's downfall.

Let the paper highlight issues that will help develop Ghana and her people. Let us focus on things that will renew and strengthen our belief in Ghana, our hope in her future and our resolve in unleashing the potential of a people resourceful, talented and hardworking.

Let this paper be bold on issues that will get the people elected as our temporary custodians to do what is right and proper, say what is useful and uniting, do what will bring relief and security to the people, take responsibilities for their actions and inactions and implement policies that will allow the enterprising people of this country the space, freedom and stable environment to work and prosper.

The Statesman must help the nation tackle the cancerous culture of corruption and maintain a strong stance against all things that retard our nation's progress.

The Statesman must serve as a mirror to society by committing pages to our sanitary conditions, our children's education, the quest of the youth for skills and jobs and our pensioners' wellbeing. Let the paper help the police rid our streets of criminals and protect our future leaders from the menace of drugs and violent crimes.

Let the Statesman support civil society and sincere politicians to elevate the quality of our political discourse.

To the people behind the paper, you are going to face competition and challenges. Accept your challenges as opportunities. Don't see your competitors as your enemies. Encourage them with your content to elevate the quality of journalism in Ghana. The competition out there may berough and tough. But you can succeed. Play by the rules; be innovative; keep it clean and keep it real.

I am confident that the new Statesman has returned to promote our shared tradition's non-authoritarian creed and will draw its strength from the non-coercive power of reasoned argument and factual journalism, in contrast to those who depend on intimidation by propaganda or lies.

The Statesman should follow its fearless tradition – a tradition that has been kept alive, commendably, over the last few years by some notable newspapers, including but not limited to the New Crusading Guide, the Ghanaian Observer, the Daily Guide, the Searchlight , the Chronicle and the Public Agenda .

It must not be constrained by the cramps on trade in criticism that are imposed by the cartels of false propaganda, insults and fanciful journalism.

I leave you with the wise words of Frederick Douglas: “If there is no struggle, there is no progress. Those who profess to favour freedom, and deprecate agitation, are men who want crops without plowing up the ground, they want rain without thunder and lightning.”

Betting is hurting our game, players and team officials are ...
16 minutes ago