The inadvertent curse of abundant natural resources (VII) - The solution 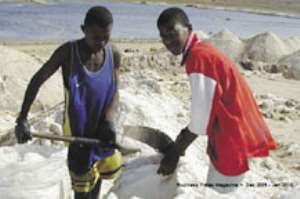 Literally, there is no single person in the country who doesn't have an opinion about what needs to be done to get Ghana on the developmental track. I can assure you that even our smart toddlers can rattle from archaeology to zoology on what they think can be done for that rather illusive dream to materialise.

Any average Ghanaian will tell you, if I may speak in their place, for the nation to develop we need first class educational institutions, a modern integrated transportation system, 21st century laboratories in all discipline of science, factories to process all our excess agric produce and the possibilities are limitless. However, all these things depend on money or more appropriately capital.

I haven't really studied the Koran very well and therefore cannot offer an informed commentary on its themes. On the other hand, I have read my bible from cover to cover and regarding money it says it answereth everything. Quite rightly, I know some people will be quick to quote all the negative phrases about money to counteract that statement, but this is not what this piece is about - there will be a time and a place for that.

What I recommend is based on self reliance and I know that as you digest this one a deluge of questions are taking over your thoughts. The clichÃ© that we are poor has been burned into our consciousness to the extent that changing public opinion on that is virtually impossible. On the other hand, contrary to the accepted belief there is enough capital in the country to dwarf all the foreign loans and investments that has come into the country so far. Unfortunately, all that capital is frozen in time, which our capital strapped nation cannot get its hands on until drastic action is taken. All that is needed is the mechanism to unlock the various disjointed insignificant sums in the economy into one critical mass. The other components needed for this to take effect are already in place, i.e. the banking system and the stock market what is left out of the trio is property rights.

It is almost impossible to run a modern economy without a vibrant and efficient financial institution. That is the reason behind the creation of the various state own banks to provide adequate credit and facilitate smooth commercial transactions. However, that noble thought which was, perhaps, necessary at the inception of the nation has led to an error in economic thought that it is the remit of the government to provide credit. Any efficient government cannot stay away too far from the provision of law and order and security. But the competition for votes and our psychological need for power have led to the political parties out promising each with ridiculous manifesto that offer the Sun while the moon is even beyond their reach.

Now due to the fact that most economic activities in the country take place outside official records the tax base of the government is woefully inadequate. As a result in order to meet some of their promises they clock huge air-miles with cup in hand to donor countries and international financial institutions begging for money, while the golden hen is sitting right under their noses.

I don't want anyone to get me wrong. It is alright for the government to secure a loan from a foreign country when the nation is in distress like natural disaster or during an economic meltdown but when it becomes a perpetual national policy then we are on a slippery slope of mortgaging the nation to international financiers.

Because our developmental efforts are based on foreign loans we are stuck in neutral gear without making any serious progress. Most of these loans come to finance projects that will yield immediate returns so our long-term plan like education is shelved and health investment is compromised. And I need not tell you that a healthy mind lives in a healthy body.

So it is obvious that we cannot rely on foreign loans to guarantee our long-term development. However, to get to the nitty-gritty of this piece, there is one huge mistake that a whole lot of people make regarding the provision of credit by banks that needs to be corrected. Most people think that when you go to the bank for a loan the manager just offers you one and that's it. The reality is when anybody goes to the bank for credit he or she goes with a whole lot of things:

1. His or her credibility, which has been cultivated over considerable number of years.

2. A collateral in the form of marketable assets like real estate, land, farms or a business.

It is important to note that the bank manager does not give you loan more than you are worth. Because he has got to look out for his recourse of action when you default, which is important to keep him in business or for that matter his next client to get access to credit when needed. Since independence the government has been the main conduit in the provision of credit by the creation of all sorts of banks, which some of them are defunct like bank for housing and construction, co-operative bank just in line with what happened to Ghana Airways, State Fishing Corporation, Nsawam Food Cannery and many other SOEs because nobody cared. It belong to the government was the standard clichÃ©. As a result a backbreaking amount of these banks' clients took loans and never paid back leading to their inevitable collapse. Though in every society there are certain people who always don't play by the rules, however, a strong judicial system can limit their impact, which can materialise when our judges are paid well.

Having said that, it is now clear that the banking system is self-supporting almost in private hands without any bureaucratic and government meddling. Yet it is not delivering the needs of the national economy because majority of the people in the country cannot get access to credit. And for the national economy to fire on all cylinders every sane Ghanaian who is enterprising and needs credit for business start-ups or expansion should have access to it. And that can be delivered when property right is in full swing. I therefore propose that the government should embark on a comprehensive private property registration throughout the country. And by property I mean real estate including every shack, for example, in Nima because every shack sits on a land and the land has got value, farms, lands, businesses or any marketable asset. It's not going to be easy. There will be a lot of difficulty in the registering of businesses because people might think the government is using the back door to get them to pay their taxes but that shouldn't deter the government. On the negative side of this proposal there are many who will rebuttal that most poor people don't have property and how is that going to help them. And the reality is any poor person with a marketable idea has got family member or friend with property who knows him or her intimately and will be prepared to back their idea with a loan from the bank using their property as collateral so long as it is registered. However, if the friend or the family member property is not recognised it cannot be used to enter into any contract. And that is why we have corporations and most of them started as friends or family members pulling their resources together. When Henry Ford walked eight miles to Detroit to look for a job he didn't have a dime but those who had the money saw the profitability of his ideas and they supported him and in the process made a fortune for himself and his backers.

Once this is done the multiplier effect will be incredible for the economy. Initially there will be more official businesses, meaning more taxes to the national coffers. The government can then afford to increase the salary of the police service, teachers etc., as well as improving our infrastructure. Besides, all those loans that are made will be insured and they become part of the capital assets of the nation. Because those premiums will not just be sitting somewhere waiting to be used when the time comes but will be invested in real estate into corporation that are enterprising in medical laboratories that will be discovering and producing life saving drugs.

My dear brothers and sister there a lot of people who are hungry for success littered across the length and breadth of the country and we can hang on their tailcoat for the country to succeed if we will open the way for them. Our success is not going to come from people who celebrate middle class comfort but people who are dying to come out of the crappy basement of poverty. The Wright brothers were a bunch of bicycle mechanics and yet came up with an invention that changed the whole world. Thomas Edison just completed three month of formal education and nevertheless more than half of the world population benefits from his invention and very soon it will be the whole world. Michael Faraday had the most basic of education, self thought himself and invented the heart of the industrial world - the electric motor.

This is my parting thought which I have repeated in a lot of my articles but a bit refined and sharper here. We can have all the technological advancement around the globe in the country that is being able to manufacture them ourselves but if between 60% – 70% of the country's work force is still engaged in the agriculture sector then we will forever remain a third rate economy with a lot of our compatriot struggling to survive. Unless a serious effort is made, not by the government, but by people who can afford to go into mechanised farming to reduce the workforce to a respectable 10% in the next twenty years we will just be playing tiddlywinks with our future until kingdom come.

The decision is ours now. The success of the European and the Americans I have used constantly as a point of reference in these series didn't come overnight. They are a product of a combination of actions and decisions taken centuries ago and we have to take ours now for our sons and daughter to enjoy in the future.