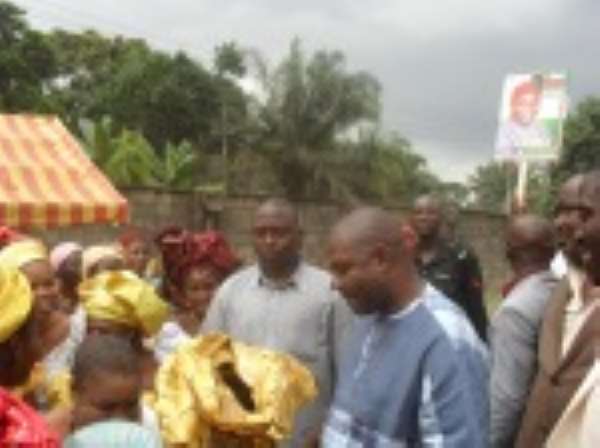 The people of Ohaji went agog for the Speaker of Imo State House of Assembly Rt Hon Goodluck Nanah Opiah .Chief Opiah was in Ohuba,Umuagwo ,Umuapu and Awara/Ikwerrede communities of Ohaji in the Ohaji/Egbema Local Government Area of Imo State last week for consultative meeting with the people of the area. At each community he went, a mammoth crowd made up of traditional rulers, political leaders, women, youths and children roll out drums to welcome the Speaker. Guests were entertained by different traditional dancers.

Many dignitaries at the communities visited sang Opiah's praises, citing his achievements in the House of Assembly as well as his love for his people. At Ohuba, the CDC Chairman of Ohuba expressed the community's gratitude to Opiah for the wonderful and quality representation of the distinguished Speaker at the Imo Assembly and his scholarship scheme through the Divine mandate Foundation,his human empowerment and his financial help to the less privileged in Ohuba. According to him “Opiah is a great son of Imo State and a great blessing to Ohuba people. We are gathered here today to celebrate our illustrious son who has displayed a good sense of responsibility in the discharge of his legislative functions in the House of Assembly hence the need to encourage him to do more.

In his speech at Ohuba, a former commissioner in Imo State , Nze Callistus Nwokoma described Opiah as an experienced and efficient lawmaker who has been an integral part of the success story of the Ikedi Ohakim administration in the state. He said that through the help of Opiah, Ohaji/Egbema has benefited a lot from government. He also charged the people to rally round the legislator and muster support for his re-election. Ohuba people pledged their support for Opiah and for Governor Ohakim. Chief Opiah, thanked the people of Ohuba for supporting him .He restated government's readiness to continue to implement life touching infrastructural development and called on the people to remain law abiding and aid the government in ridding the society of criminals.

At Umuagwo, the people pledged to ensure that the Speaker, Imo State House of Assembly continue as the Chief Steward of Ohaji/Egbema Constituency in the State assembly. They said that people of the area agreed to align with Chief Opiah based on his antecedents. They also described Rt Hon. Opiah as a rare gift to the people of Ohaji/Egbema and called on sons and daughters of the Local government Area, at home and in Diaspora to join force with the experienced legislator so that he can do more for the area and move the Constituency forward. They thanked Opiah for awarding scholarship to students of the area and for giving jobs to so many youths and graduates of the community. Opiah advised all to vote for PDP in the April elections and to abide by the electoral guidelines, as laid down by the Independent National Electoral Commission (INEC) as they vote. He told the youths not to indulge in any form of electoral malpractice, but to conduct themselves properly .He announced immediate employment in his office for 2 youths of the community.

At Umuapu ,the Traditional Ruler of the community said that the Speaker has the full support of Umuapu and however encouraged the Speaker not to be perturbed by the ranting of few “Nshikor politicians ”from the community whom he said does not represent the interest of the good people of Apu. Chief Opiah promised to continue to engage progressive thinking youths of the area in meaningful employment.

At Awara/ Ikwerrede, the Speaker and his entourage witness another colourful and electrifying crowd . The mammoth crowd that thronged the meeting venues, also confirmed that the People's Democratic Party, PDP, in Imo State had not only stamped its feet on the political terrain of Ohaji, but was also solidly on ground. Traditional rulers, Artisans, market men and women, members of the road transport workers, vigilante group,students, members of civil societies, the aged and the young, all graced the consultative meeting at Awara. The Speaker told the mammoth crowd to consolidate on the gains of good governance by continuing to cooperate with the governor of Imo state in his quest to move the state forward. He assured the people of more dividends of democracy. He said his words remained his bond with the people, describing the state PDP as a highly organised party.