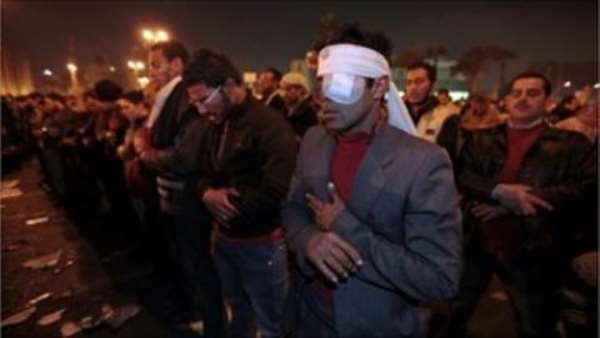 
Police have been ordered back on to the streets of Cairo, as tens of thousands of people gather in central Cairo for a seventh day of protest.

The demonstrators have called for a general strike on Monday, and are holding prayers in honour of those killed in the unrest.

Protesters want President Hosni Mubarak to step down after 30 years in power.

The president has ordered his new Prime Minister Ahmed Shafiq to push through political reforms.

Egyptian state television read out a letter he had sent to Mr Shafiq, in which the president speaks of the need to make progress towards constitutional and legislative reform through a dialogue with political parties.

He also calls for economic policies that give the highest concern to people's suffering and bring down unemployment by creating new jobs.

Correspondents say all the signs continue to suggest that the only change the protesters will settle for is Mr Mubarak's removal from office.

'Protest of millions'
As demonstrations enter their seventh day, correspondents say there are at least 50,000 people on Tahrir Square in the centre of the city.

Elsewhere the streets are busy and things appear to be returning to normal, says the BBC's Tim Wilcox in Cairo.

There are plans for a "protest of the millions" march on Tuesday.

On Sunday, most of the crowd in Cairo's Tahrir (Liberation) Square were unfazed by low-flying visits from air force jets and a helicopter.

"Change is coming" promised the leading Egyptian opposition figure Mohamed ElBaradei when he addressed the crowds.

Thousands rallied in Alexandria and there were also sizeable demonstrations in Mansoura, Damanhour and Suez.

Police were noticeable by their absence so the protests were not marked by the sort of clashes which have left at least 100 people dead since rallies began on Tuesday.

But with continued reports of looting, the Interior Minister Habib al-Adly announced on Sunday that police would be back on the streets to restore order.

Economic impact
The unrest is having an impact on the Egyptian economy, beyond the closure of shops and businesses and the call for a general strike.

On Monday, New Zealand joined a growing list of countries warning their nationals not to travel to Egypt if they can avoid it and the US, Japan and China are among states preparing to evacuate their citizens.

Tourism is a vital sector in the Egyptian economy, accounting for about 5 to 6% of GDP.

Meanwhile, Japanese car maker Nissan has announced that it is halting production at its Egypt plant for a week, and it has urged non-Egyptian employees to leave the country.

Global markets are also likely to react. The Nikkei fell in early trading in Tokyo as the Egyptian unrest prompted investors to shun riskier assets.

'Orderly transition'
International pressure is growing for some kind of resolution.

In the strongest language yet, both US President Barack Obama and his Secretary of State Hillary Clinton talked about the need for an "orderly transition" to a democratic future for Egypt.

The White House says US President Barack Obama made a number of calls about the situation over the weekend to foreign leaders including Turkish Prime Minister Recep Tayyip Erdogan, King Abdullah of Saudi Arabia and British Prime Minister David Cameron.

The protests in Egypt are top of the agenda of a meeting of European Union foreign ministers in Brussels on Monday.

China, meanwhile, has called for a return to order.

"Egypt is a friend of China's, and we hope social stability and order will return to Egypt as soon as possible," a Chinese foreign ministry spokesman said on Sunday.

The unrest in Egypt follows the uprising in Tunisia which ousted President Zine al-Abidine Ben Ali two weeks ago after 23 years in power.