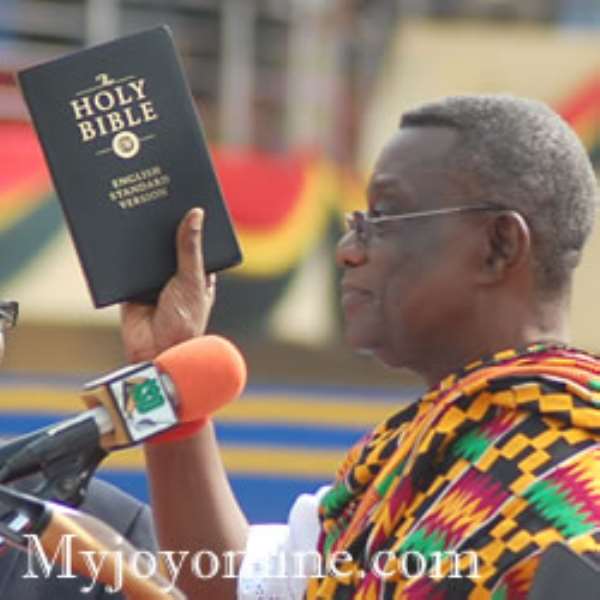 
President John Evans Atta Mills has called on African leaders to be driven by shared values that will ensure the integration of the African continent.

"We know that the ingredients of these shared values include transparent governance, free elections, human rights issues, cultural development, gender sensitivity, equality and, most important, economic emancipation," he stressed.

Addressing colleague Heads of State and Governments at the 16th Ordinary Session of the Assembly of the African Union (AU) in Addis Ababa, Ethiopia, yesterday, President Mills underscored the need to allow the people to develop the material foundations for "our vision of an integrated, prosperous and peaceful Africa".

The summit opened on the theme, "Towards Greater Unity and Integration Through Shared Values".

The President said while at a point in time the cause was the total liberation of the African continent, today it was the twin inter-related objectives of unity and integration.

"Our task today is to reflect on how these shared values can speed up the integration of the continent and enable us, as a people, to develop the material foundations for our vision of an integrated, prosperous and peaceful Africa driven by its own citizens and representing a dynamic force in the global arena," he stressed.

President Mills said African unity could no longer be a mere dream, saying that it was an objective worthy and capable of being achieved.

"Africa must develop, and we must develop now! We do not have the luxury of time. Too much time has passed us by and we need to move as fast as we can, of course, with calculated speed," he admonished his colleagues.

He noted, however, that this could only manifest when the barriers that continued to slow the progress of the continent were broken down.

He stressed the need for the provision of a viable economic space regionally and continentally to create a single compact African political and economic unit.

President Mills advocated the need to plan and construct infrastructure on a continental scale, since that would attract international capital and help create the material basis for integration.

He said the late President Nkrumah was convinced that the unity of Africa and the strength it would gather from continental integration was a sine qua non for Africa's economic and industrial development, pointing out that in Dr Nkrumah's quest to lead the way to give the continent a shared sense of belonging, he worked tirelessly for Africa to move away from being hewers of wood and drawers of water. "Our quest for economic development is now greater than ever and it speaks for itself that the best way forward is through a united and integrated agenda," he said

On Ghana, he said the country had started pumping oil in commercial quantities and reaffirmed his commitment to make the oil find a blessing and not a curse.

President Mills said the oil revenue would be used for the benefit of the generality of Ghanaians, adding, "That is my solemn pledge to the people of Ghana and nothing will move me away from that position."

Commenting on the disturbing, events emanating from Cote d'Ivoire's just-ended election, the President lauded both the AU and ECOWAS for the positions that had been taken in looking for a lasting solution to the situation. "In all honesty, and with history to guide us, we need to approach the Ivorian matter with tact, caution and diplomacy. As the Good Book tells us, "There is a way that may seem right to man but that way only leads to destruction," he cautioned.

On his declaration of this year as an action year, President Mills urged the AU to resolve to make this year "our action year and give more meaning to our oneness".