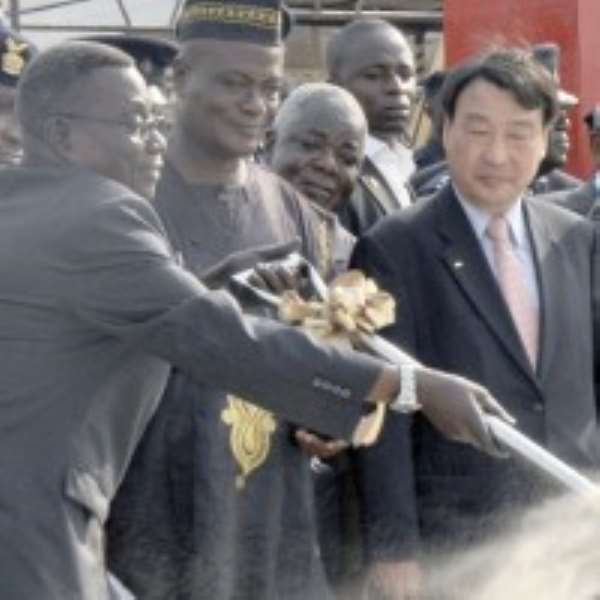 A ground-breaking ceremony has been held at the National Police Training School in Accra to begin the first phase of the STX Korea Housing Project, with an assurance from President John Evans Atta Mills that his 'Better Ghana' agenda would be vindicated by the completion of the 200,000 housing units within the next five years.

The president was grateful to STX Korea for partnering Ghana to execute one of its major manifesto promises of providing housing for Ghanaians, but warned the company against shoddy job

'The project is anchored to the NDC's 2008 manifesto's commitment to expanding infrastructure, and its successful implementation will be a vindication of our social democratic tenets as well as our commitment to building a better Ghana.'

The president stressed that in this 'action year', the sod-cutting ceremony underscored government's desire to reduce the country's housing deficit to give decent accommodation to the hardworking populace.

Currently, STX is tasked to construct 30,000 housing units in all ten regions to house personnel of the security agencies.

This, according to the president, would bring to an end the appalling spectacle of service men keeping their fridges and other properties in their porches or balconies due to congestion.

The president warned the South Korean company that Ghana expected the best and he would therefore not entertain any shoddy work.

The Minister for Works, Housing and Water Resources, Alban Bagbin, was extremely excited that the STX deal had materialized after thirteen months of several discussions.

He announced that five sites had been located countrywide for the construction of the 30,000 housing units.

Five centres have also been earmarked for training of workforce on the technology to be used to satisfy the standard, quality and time obligations.

The ground-breaking ceremony, he stressed, was a show of the NDC government's strong commitment to delivering a better Ghana by providing world-class affordable housing units to all Ghanaians.

'It is equally important that we leave here committed to following to a logical conclusion the larger dream of building 200,000 housing units. When we achieve this goal, we will leave our people a legacy that will enable them to live the kind of lifestyle desired by all of us but which only a privileged few have now.'

The Korean Minister for Lands, Transportation and Maritime, Chung Jon Hwan, congratulated Ghana for moving a step further towards her development.

He was happy that Ghanaians were desirous and enthused about developing their country through education and infrastructure.

He described Ghana as the most peaceful country in the sub-region, the reason for which it is the first country that STX wants to partner in Africa.

He observed that the days that the super powers colonized Africa were over as they (developed nations) now wanted to partner Africa in order to develop the continent.

The STX Chairman to Ghana, Lee Hee Beom, noted that his company would do its best to contribute to the development of Ghana. He disclosed that it would also construct roads, schools as well as trade in water and fuel with Ghana.

The short but colourful ceremony was well-attended by the military and police hierarchy as well as other security agencies.

Ministers of state and party faithful were also in attendance.