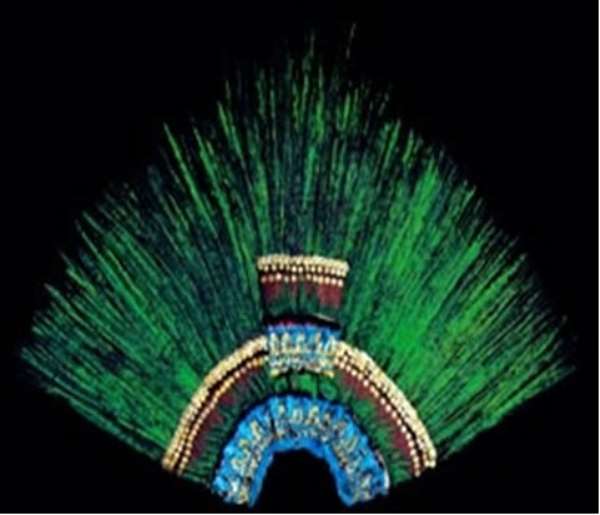 According to information in the Austrian papers Standard, Kurier, and Kronen Zeitung, Austria seems finally willing to return the Montezuma Crown which Mexico has been claiming for decades without any success. (1) It appears the return will be a temporary loan in exchange for a temporary loan of a gilded carriage used by Emperor Maximilian I in the nineteenth century that is now in the National Museum of Mexico.

We have always been of the view that Austria should return this artefact which means very little to Austria (2) and a lot more to Mexico, the only State that protested against the annexation of Austria by Nazi Germany. This act alone, in our opinion, should be sufficient ground for returning Montezuma's crown. But the Austrian authorities, misled by the ideas of the ethnologists, museum directors and the false prophets in the British Museum, Berlin, Chicago and elsewhere, have up to now refused to contemplate the eventuality of returning the crown. (3)

Following the usual tactics of the so-called “universal museums”, British Museum and the Berlin Museums, Austrians have also resorted to the well-known argumentation structure of “shifting arguments”. This is the pattern followed by the British in the cases of the Benin bronzes, the Parthenon/Elgin Marbles and the Rosetta stone. The Germans also use this method in the case of the bust of Nefertiti. The opponent is in such cases presented with a whole series of arguments, some serious, others less so, that have the cumulative effect that in the end no one is sure of the real ground for the refusal to loan/return the cultural object except the determination of the present holder not to return the object to its country of origin as required by resolutions of the United Nations, UNESCO and the International Council of Museums (ICOM) Code of Ethics for museums.

Austrians have argued that the Montezuma's Crown was legally acquired in the 16th century Europe by the Habsburg archduke Ferdinand II of Austria. What they do not further consider is how the object came to Europe. The Mexicans are of the view that the crown was among the many objects the Spaniards stole from Mexico. Prof. Feest, former Director of the Ethnology Museum, Vienna, has argued that the feather crown may not be able to travel to Mexico, that the crown was never really part of the power symbols of the Mexico rulers but part of the symbols used in ritual ceremonies by priests. The Austrians seem to have learnt from the experience of the British and Germans whereby untrue, unsubstantiated or weak arguments are repeated so often that others, at least their own people, start considering them as solid arguments.

The remarkable change in Austria's position in this matter is to be welcomed by all. It is perhaps no accident that this change occurred after change of leadership in the Kunsthistorisches Museum and at the Völkerkunde Museum. We seem to have now a museum leadership more attuned to the ideas of our times which favour, in general, restitution and, contrary to the old guard, is not imbued with the ideology that the Western world has a duty and right to guard cultural property of others. The new leadership does not appear to share the pretentions of some Western museum directors who seek to impose on others a presumptuous universalism that authorizes the domination of the West over Latin America, Africa and Asia. We sense from the new museum leadership a desire to get on well with other peoples through mutually agreed arrangements, thus departing from the old guard that sought to impose its will on others.

But despite the general change, there seems to be a resonance of the past in the reported statement of the director of the Kunsthistorisches Museum that there has been no “official demand “ from Mexico. It has been demonstrated elsewhere that States that have their cultural artefacts in other States are not required to make an official request before the artefacts can be returned. The holding State could and indeed should initiate the process. (4) For in many cases only the holder knows where the object is and its present condition.

If there has been no demand from Mexico for the Montezuma's Crown, why were the late President Klestil and many other persons so involved over the last decades with this issue? Why did the issue find its way to the agenda of the Austrian parliament? Why have the former museum directors been at pains to explain that they would not return the artefact? The argument based on the absence of demand, formal or otherwise, is a relict from the old guard at the museums, an inheritance from the British Museum and the Berlin Museums.

We hope that this gesture by Austria to return the feather crown, if it materializes, would be the beginning of a new policy to return artefacts to their countries of origin as has been demanded by the United Nations, UNESCO and several international conferences as well as by the ICOM Code of Ethics

In this context, we will expect the Austrian authorities to re-examine the issue of the return of the looted Benin bronzes of which there are some 167 in the Völkerkunde Museum, Vienna. Previous directors of this museum, under the influence of the British who were primarily responsible for the initial looting of Benin artefacts after the killing of innocent Benin women and children as well as the burning of Benin City, have refused to consider the question of restitution. Members of the Benin Royal Family have come to Vienna to open a great exhibition on Benin art and have requested the return of some of these objects without any success.(5)

Now is the time for Austrians to act in their own sovereign right to change their position regarding an artefact which means a lot to the people of Mexico as evidence of their pre-Columbus civilization but is of little importance for Austrian culture. The vision of the dominating European males, the conquistadores, as masters of the world, has been long abandoned and the principles and practices of artefacts collection must also change accordingly. Ideas of the 19th century cannot continue to dominate museum practices of the 21st century.

http://www.earthtimes.org
2. The Völkerkundemuseum, Vienna has since 2004 closed its permanent collections to the public because of renovations, which, I understand, will not be completed before 2013. Members of the public who wish to see Montezuma's Crown or the Benin bronzes will not be able to do so unless the objects are on show in a special exhibition. It is relevant to note that one of the main arguments used to support the retention of cultural objects of others by the Western museums is that more people see these objects in the museums than in their country of origin. But can this argument apply at all when the collection is closed for a decade?

3. Useful information on the dispute between Mexico and Austria about Montezuma's Feather Crown which has been going on for decades can be found in:

English version, Anne Dellemann “No bilateral problems - except for Montezuma's crown of feathers”

4. K. Opoku. “Is the Absence of a Formal Demand for Restitution a Ground for Non-Restitution?” http://www.museum-security.org

Tell your family and friends choking the payroll to forfeit ...
44 minutes ago