KMA to pull down 70 houses 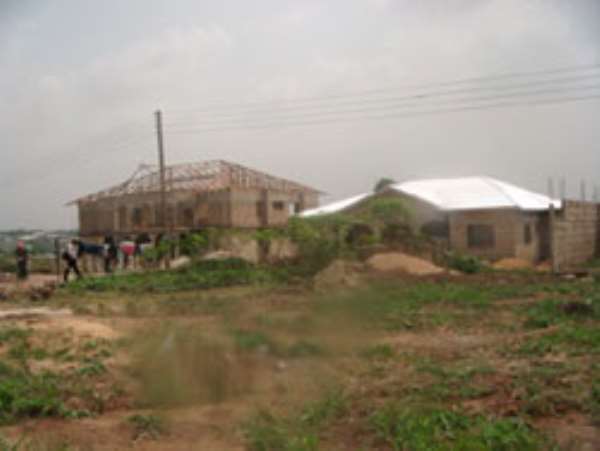 THE KUMASI Metropolitan Assembly (KMA) has hinted that 70 houses at Atafua Extension and Kronom-Aboahia, located on public lands within the Kumasi metropolis, would be pulled down in February.

Briefing the media in Kumasi on Monday, the Public Relations Officer for the Metropolitan Assembly (MCE), Mr. Clement Kegari, said the move had become necessary, following the refusal of the developers to move away from the public sites.

Mr. Kegari told journalists that about two months ago, the KMA, after realising that some people were encroaching on the land earmarked for the construction of a road, which would be linking

Berekese road to that of Offinso, moved in to demolish the houses that had already been built.

To the surprise of the KMA, the PRO said, new houses have sprung up in the area, which prompted the 'Akyempimhene' of Kumasi, Oheneba Adusei Poku, to charge the assembly to take action on the issue.

Mr. Kegari indicated that since the assembly liaises with the public for information to do its work, the KMA took the prompting from the Akyepemhene very serious.

According to him, after surveying the place, it was realised that areas earmarked for public institutions had been taken away by the illegal developers without permits.

In order not take the people by surprise, the Engineering Department of the assembly invited the developers to a meeting, which 200 persons attended. These developers admitted that they had encroached on the land. Journalists were later conducted around the encroached land.

New houses marked with 'to be demolished 'were still under construction, despite the warning from the city authorities.

Kegeri was of the view that the decision by the KMA to demolish all houses built on the proposed road, and other public sites such as police stations, fire stations, children's play grounds and others, was in the interest of the people resident there.

He questioned,' How can the authorities prevent communicable diseases, if an area earmarked for sanitation sites are taken away by encroachers.'

Last week, the developers in the area demonstrated against the KMA over the decision to demolish the houses.

The picture shows houses built on public lands at Atafua Extension and Kronom-Aboahia.