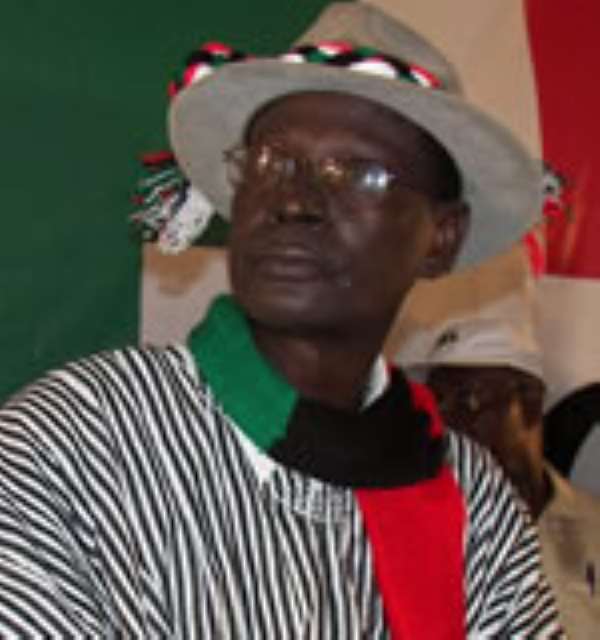 
At Least one person has been reported injured after tempers flared up in a meeting at the private residence of the Wa East constituency chairman of the National Democratic Congress (NDC).

The meeting was to settle an impasse between two rival factions.

It was also to deliberate on key issues hampering the development of Wa East district, one of the most deprived constituencies in the Upper West region.

It however turned bloody when a dissatisfied youth group got at the throat of the party's executives, apparently to press home a point.

This led to the assault of an NDC fanatic popularly known as Muda, by members of the opposing group.

The unfortunate scene, which unfolded on Saturday afternoon in the presence of the Deputy Upper West Regional Minister, Ceasar Kale, the Wa Municipal Chief Executive, the Wa East DCE, the Wa East constituency chairman and some regional executives, attracted a large crowd of party faithful.

There was total pandemonium when some party supporters sighted a colleague bleeding profusely from the eye, prompting many of them to run helter-skelter.

The youth group calling itself the Concerned Youth of Wa East has been at the throat of the Wa East DCE, Amin Salifu and the party executives in recent times, blaming them for alleged corrupt practices and failure to champion the development of the district.

The accusations attracted counter ones from a group loyal to the camp of the DCE, generating an internal turmoil within the party in the area.

The meeting was therefore scheduled to find an antidote to the factionalism and blame game last Saturday.

According to Daily Guide sources, the meeting ended in stalemate, with party executives fleeing the meeting grounds following the violent occurrences.

The leader of the concerned youth group, Seidu Mohammed Saani, who is also the Assembly Member for Bulenga electoral area in the Wa East District, stated his dissatisfaction about the manner in which the Wa east DCE and party executives managed the affairs of the party in the area.

He therefore led his boys to register their displeasure over happenings on several platforms and called for the immediate removal of Amin Salifu from office.

In a statement issued to the press earlier and copied to the office of the president, the constituency executives vehemently opposed the actions and allegations, describing them as mere fabrications aimed at denting the image of the DCE.

They also described the group as unconstitutional and completely alien to the NDC in the region, urging party faithful to disregard its concerns.

Ceasar Kale, Deputy Upper West Regional Minister, when reached on phone to comment on the matter, admitted he was at the meeting but indicated that aggrieved party members always had their way of ironing out their differences.

While condemning the scores of violence that characterized the meeting, he noted that such acts were repelling voters from the party, calling for an attitudinal change among the party's foot-soldiers.

The DCE, Amin Satifu, when contacted, described the incident as unfortunate and in contrast with the objective of the meeting.

According to him, the Wa East District capital was the only district capital in the country without electricity and other social infrastructure which he was working closely with government to address.

He said despite the myriad of challenges facing the district, giant steps were being taking to meet the development needs of the area, disclosing that 67 boreholes were being provided to improve on the water situation of the area, which he described as unprecedented.

Caesar Kale, earlier in his address, lamented that the region was bedeviled with violent agitations from the party's foot-soldiers.

He said most of them had made a lot of complaints, claiming that their needs and aspirations had been neglected by the NDC party since it assumed office in 2009.

Mr. Kale confirmed that even though the general complaints of party supporters across the country were genuine, government could not satisfy all of them at a go, advising all NDC supporters to remain steadfast and committed. He added that the government would, in due course, meet the needs and aspirations of all deserving members.

As soon as the deputy minister finished his speech, the aggrieved party members were up-in-arms against each other, further deepening the crisis within the party structures in the area.